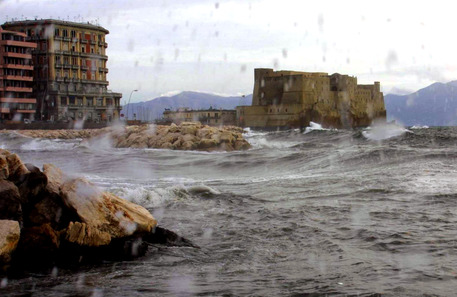 (ANSA) - Naples, Mach 15 - An ancient port in Naples, believed to be the harbour 25 centuries ago when it was called Palepolis by the Greeks who ousted the Etruscans, has been discovered in the sea off the iconic Castel dell'Ovo, archaeologists said Thursday.
Underwater archaeologists have found four submerged tunnels, a three-metre-wide street with cart-furrows still there and a long trench for soldiers, six meters down to the right of the castle, Neapolitan archaeologist Mario Negri said.
"It's a discovery that opens up a new scenario for reconstructing the ancient structure of Palepolis," he said.
The first settlements in the area were made in the ninth century BC, nearly 3000 years ago, when Anatolian and Achaean merchants and travellers arrived in the gulf on their way to the mineral lands of the high Tyrrhenian and founded Parthenope in the area which includes the isle of Megaride (the present-day Castel dell'Ovo) and the Promontory of Monte Echia (the present-day Monte di Dio and Pizzofalcone). The first inhabited nucleus was a small commercial harbour which, thanks to the continuing trade traffic, expanded and became a town in its own right. At that time, however, the coastline was subject to continual violent clashes in the struggle for trade dominance, in particular between the Greeks and the Etruscans. The supremacy gained by the Etruscans led to the inevitable decline of Parthenope, which was repopulated and rebuilt under the name of Palepolis round about 474 when the Greek settlers managed to establish their supremacy. This created a situation of greater freedom to settle on the coasts of Campania and found new settlements. Further south, a new and larger economic and commercial centre was built, protected by a system of towers and alterations. The new city was named Neapolis in Greek ("new city"), while the eastern part, including Palepolis, became a periphery far from the hubbub of the city, a place where one could stay in peace and quiet and, from the time of the Roman Empire, towards the end of the 1st century BC, the sumptuous patrician villas were built.