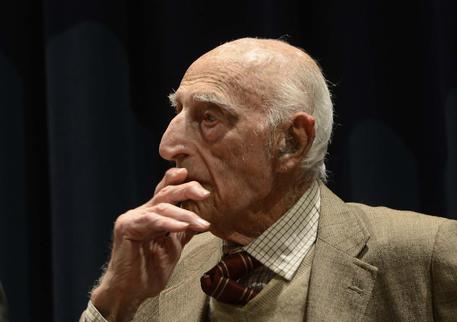 (ANSA) - Rome, March 2 - Italian art critic, painter and philosopher Gillo Dorfles died Friday in Milan at age 107, after having worked in fields as diverse as medicine, architecture, music, and fashion.
When Dorfles was born in Trieste in 1910, the city was part of the Austro-Hungarian Empire, and in his long life he met a wide range of Italy's most important historical figures of the times.
He met Italian writer Italo Svevo when he was working in a paint factory, and was close friends with Italian poet Eugenio Montale as well as Lucio Fontana, who he helped launch his career.
He took coffee with Italian poets Cesare Pavese and Salvatore Quasimodo, was a guest of Frank Lloyd Wright, and a personal friend of Renzo Piano.
Perhaps his most important fortune and strength was the fact that he remained lucid until the end, even participating in mid-January of this year at an exhibition of his drawings from 2010-2016 of the character he invented called VITRIOL, at Milan's Triennale Museum.
In terms of the secret to his longevity, perhaps it was in his ability to continually look towards the future.
"I've forgotten a half century and I'm forgetting the other half, because I want to live in the future," he said in a recent interview.
"Art is the only passion to which I've always remained faithful, since the first shocks of abstractionism of Klee and Kandinsky," he often said.
Psychiatry was another of Dorfles' interests, and Dorfles read from works of Jung and Rudolf Steiner. This theme became a sort of guiding thread running through much of his written work.
In 1948, together with Atanasio Soldati, Gianni Monnet and Bruno Munari, he was one of the founders of MAC - the Movement for Concrete Art, and in 1956 he contributed to the creation of ADI, the Association for Industrial Design.
His writing is extensive and spans his many interests, including monographs of artists from Bosch to Toti Scialoja, as well as books on architecture, a groundbreaking text on industrial design in 1963, and a cult classic titled "Kitsch: An Anthology of Bad Taste" in 1968.