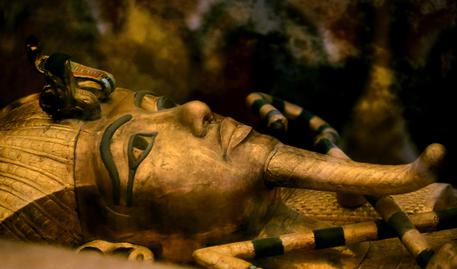 (ANSA) - Cairo, January 30 - Researchers from the Archaeo-Physics department of the Turin Polytechnic have been authorized by the Egyptian government almost a year after they made the request to conduct geo-radar studies inside Tutankhamen's tomb in Luxor's Valley of the Kings.
The Polytechnic noted that, according to a theory by the British Egyptologist Nicholas Reeves, the burial place of the pharaoh - known especially for the funerary treasure buried with him including a mask that has gained iconic status - could be part of a larger tomb possibly belonging to Nefertiti, an Egyptian queen whose semblance is preserved in a bust exhibited in Berlin. Measurements will be taken from January 31 to February 6 to "determine whether there are empty spaces and/or halls hidden behind the walls of Tutankhamen's funerary chamber", which the specialist refer to using the code KV62. The coordinator of the research group, Franco Porcelli, said that advanced radar systems would be used to find out with 99% accuracy whether "hidden structures of archaeological importance are next to Tutankhamen's tomb". The measurements will be then be looked at alongside the presence of suspected cavities in the rock face a few meters from KV6, a cavity that "were found by the research group in May of last year using a different, non-invasive technique outside Tutankhamen's tomb, based on the three-dimensional mapping of electrical resistance levels of the underground". However, the geo-radar measurements that will be taken in February will show whether the suspected cavities are connected with KV62, the statement noted.
The team of experts belongs to two departments of the Piedmont region state polytechnic: the Applied Sciences and Technology Department and the Environmental, Territorial and Infrastructure Engineering Department, in "collaboration with personnel from the University of Turin's Earth Sciences Department".
The collaboration also includes two Italian private companies: Turin-based 3DGeoimaging and Livorno-headquartered Geostudi Astier, as well as the UK's Terravision and - as Egyptology consultant - the Italian Archaeological Center of Cairo. Experts from the Egyptian Ministry of Antiquities will also be helping out under former minister Mamdouh Eldamaty.