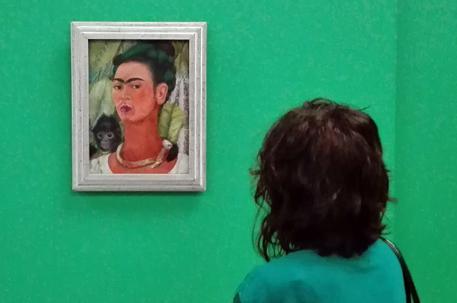 (ANSA) - Milan, January 29 - A retrospective of work by the acclaimed Mexican artist Frida Kahlo opens at Milan's MUDEC on February 1.
The 70 paintings, 40 drawings and 150 photographs on show aim to go 'beyond the myth' of the feminist artist and icon, and include numerous works never seen before.
One of these is 'Nina con collar', a 1929 portrait of an assistant's daughter that only came to light when the sitter's son put it up for auction.
It is also unusual to see the 1938 painting 'Self-portrait with monkey' - Kahlo's first self-portrait painted on commission from the then director of MOMA in New York and now featuring on the exhibition poster - on display in Europe.
The big absentee is the 1933 painting 'Mi nascimiento', bought by Madonna in 1990 and which the American singer has refused to loan to the show. "I wrote to Madonna to ask for the painting on loan and she replied 'I never separate from mi dos ninas'," said curator Diego Sileo in reference to 'Mi nascimiento' and a self-portrait dating to 1946. Visitors can instead admire the 1938 still life 'Pithayas', begun in Mexico and completed in Paris where Kahlo travelled to exhibit her work on the invitation of Andre' Breton.
Paintings such as this contribute to building a new narrative about the Mexican artist "who we all like because we are all neo-romantics and are moved by the woman who suffered and was betrayed and sick, but here we have put the known story and life events to one side to recount the artist Frida and not just the pop icon," Sileo said. To do this, the curator immersed himself in the archives of Casa Azul, discovered in 2006 on the death of Diego Rivera's patron Dolores Olmedo, to whom Frida's husband had left all his possessions. Here and in other archives Sileo found photographs of missing paintings and other itsms of interest, including the Revlon flask used by Frida to darken her eyebrows. In fact the painter portrayed herself with a moustache and joined eyebrows from 1933 onwards, playing up that rebellious streak that contributed in no small way to her legend.