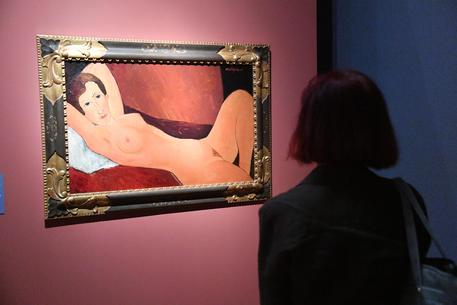 (ANSA) - Genoa, January 9 - A number of paintings apparently by Amedeo Modigliani which were put on show at Genoa's Palazzo Ducale in March have been declared fake, qualified sources said Tuesday. The Palazzo Ducale has said that it was the "seriously injured party" in the case. Prosecutors seized 21 works on display in July following a complaint by Tuscan art expert Carlo Pepi.
The curator of the exhibition, Rudy Chiappini, is among the people under investigation in relation to the case, the sources said. One of the drawings seized was original, the sources said.
According to initial reports, art expert Isabella Quattrocchi said in a statement delivered to prosecutors that the paintings in question were "blatantly falsified".
She said this was the case "both for the pigment and for the style".
The frames, meanwhile, "originated in countries of eastern Europe and the United States".
She said the frames "have nothing to do, either in context or in historical period, with Modigliani".
The seized pictures are still in the vault of Italy's crack art cops, the Carabinieri Unit for the Protection of the Cultural Heritage.
Some 21 works have been seized: Sculpted Head, 1910-11, pencil drawing on paper; The Red Caryatid/The Wedding Couple, from 1913, oil on canvas; Portrait of Moricand, from 1915, oil on canvas; Portrait of Jean Cocteau, 1916, pencil drawing on paper; Portrait of Cham Soutine, 1917, oil on canvas; Kneeling Caryatid, circa 1913, pencil and gouache on paper; Seated Nude, 1913-14, pencil and blue watercolour on paper; Caryatid from 1914, tempera on paper; Reclining Nude (Portrait of Céline Howard) from 1918 circa, oil on canvas; Portrait of Moisé Kisling from 1916; pencil sketch on paper; Woman's Head from 1917, oil on canvas; Head of Red-haired Woman from 1915, oil on canvas; Seated Woman from 1916, pencil sketch on paper; Female Portrait (La Femme aux Macarons) from 1917, oil on canvas; and Portrait of Maria, circa 1918, oil on cartoon.
Among the seized paintings are also those attributed to Moise Kisling, after art expert Marc Ottavi, official cataloguer of the work of the Polish artist, declared to police they were also false.
Modigliani, a young, flamboyantly dressed Italian from Livorno, successfully cultivated an image as artist 'maudit' in early 20th century Paris.
He drank to excess in Montmartre bistrots, got into brawls, took absinthe and vied with greats like Picasso and Diego Rivera.
Hardly any of his now-revered paintings sold in his lifetime. After a cash-strapped and stormy life, dotted by passionate affairs, he died of tubercolosis in 1920 at the age of 36.
His characteristically elongated paintings and sculptures now sell for millions of dollars.