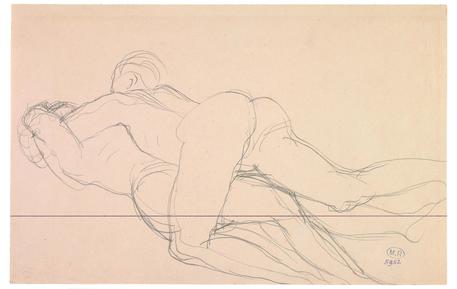 (ANSA) - Rome, November 6 - Paintings and graphic works reveal the hidden face of Jack Kerouac at the Maga Museum in Gallarate (Varese) from December 3 to April 28.
The exhibition presents around 80 works by the father of the Beat Generation, many of which have never been shown before in Italy. 'Jack Kerouac. Beat Painting', curated by Sandrina Bandera, Alessandro Castiglioni and Emma Zanella, also includes photographs by Robert Frank and Ettore Sottsass, a project by Peter Greenaway and the video of an interview with translator Fernanda Pivano for Rai Teche. The exhibition aims to shed new light on one of the literary icons of the 20th century and the principal exponent of the literary and artistic movement that shocked and scandalised the US and Europe from the end of the 1940s. The Beats and the group formed by Kerouac, Allen Ginsberg, and Lawrence Ferlinghetti in fact rejected post-war technological idealism in favour of a new, almost tribal ethics based on spontaneity that would lead to the Hippie movement, opposition to war in Vietnam and the 'Three days of peace and music' of Woodstock. The works on show have been chosen to illustrate the entire spectrum of Kerouac's creative process, exploring in particular his relationship with the tradition of American visual culture.
Their force lies in the total identity that he managed to forge between life, literary production and all other forms of creative expression such as music, song, poetry and cinema. Thus the exhibition at the Maga is a unique opportunity to admire Kerouac's work, which until now has only been displayed in a few select museums such as the Whitney Museum, Centre Pompidou and Zkm in Karlsruhe. It is divided into sections including portraits of famous people such as Joan Crawford, Truman Capote, Dody Muller and Pope Paul VI and references to Beat culture, from Robert Frank to William Burroughs.
It also explores the writer's relationship with Italy through a series of photographs taken by Robert Frank and by Ettore Sottsass of his wife Pivano, who introduced Italy to the Beats with her celebrated translations, as well as Ginsberg and Kerouac himself.