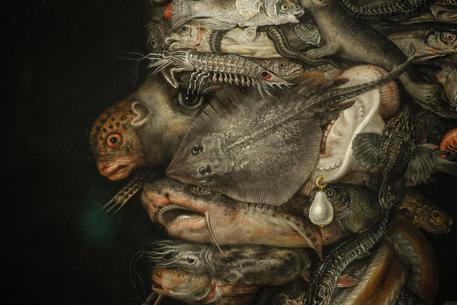 (ANSA) - Rome, October 20 - The work of Italian Mannerist painter Giuseppe Arcimboldi (1526-1593), known as Arcimboldo, is present for the first time in Rome in a major exhibition in Palazzo Barberini until February 11. The show features approximately 20 works by the artist famous for his imaginative portrait heads made of objects such as flowers, fruit and animals that made him one of the protagonists of 16th century Lombard culture. Organised by the National Galleries of Ancient Art in Rome and Mondo Mostre Skira, the exhibition (free to under 18s) has been curated by Sylvia Ferino-Pagden, a leading expert on the Milanese painter. Overall it presents around 100 works including many by Arcimboldo's contemporaries as well as art objects, tapestries, mosaics, botanical drawings and drawings of the animal kingdom that reconstruct the intellectual breeding ground dominated by a renewed love of science in which the painter's individual talent was born and thrived. Arcimboldo trained in his father's workshop among followers of Leonardo and was the much-appreciated exponent of an artistic, scientific, philosophical and humanist trend that was far removed from the classical style seen in Rome in that period. His 'ridiculous paintings' and composite heads bringing together the taste for caricature and the passion for observing nature made him one of the protagonists of international mannerist culture. Arcimboldo worked for the Habsburg courts of Vienna and Prague, in the service of Ferdinand I, Maximilian II and Rudolf II, where he was even given the noble title of Count palatine, a rarity for an artist. The itinerary starts with a section dedicated to the Milanese environment in which Arcimboldo grew up, before going on to examine the period spent in Vienna and Prague as portrait painter to the Habsburg court. This section features the portrait of the Archduchess Anna, studies for parties and the subsequent personification of the four seasons in a dialogue with the four elements.
The latter work is on show for the first time in at least 20 years. Next come the so-called reversible heads, ambiguous still life images that look totally different if rotated 180 degrees. "They are playful and strange images where however nothing is left to chance," explains the director of the National Galleries of Ancient Art in Rome, Flaminia Gennari Santori.
The artworks in fact represent "a very serious rhetorical game, a sort of engagement with the visitor's intellect," she added.