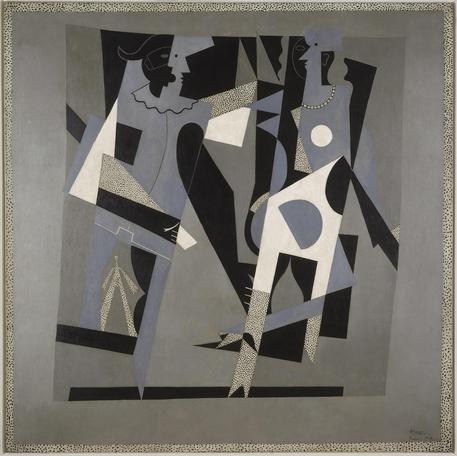 (by Nicoletta Castagni).
(ANSA) - Rome, September 22 - An exhibit is opening Friday at Rome's Scuderie del Quirinale to celebrate the centennial of Pablo Picasso's trip to Italy in 1917 with friend Jean Cocteau.
'Picasso - Between Cubism and Classicism 1915-1925' runs through January 22 and vies to highlight the impact of the trip on Picasso, who accompanied Cocteau for the staging of the ballet Parade and painted its curtain, which will be exhibited for the first time in Rome at Palazzo Barberini.
The organization of the exhibit required "three years of intense work with curators Olivier Berggruen and Anunciata von Liechtenstein", said Mario De Simoni, president of the culture ministry's Ales agency.
Berggruen over the past decade has been studying the relationship between Picasso and theater, contributing to curate the show's display of over 100 masterworks and as many documents from the 1915-1925 period, one of the most creative for the artist.
When he took the trip in 1917, Picasso was 36 and an acclaimed artist at the helm of the Cubism movement.
The curator stressed that the artist was perceiving the crisis of the movement that had made him famous and let Cocteau persuade him to accompany him in Italy, where he had to meet Ballets Russes impresario Sergej Djagilev to design the set, costumes and curtain of the ballet Parade.
Far from the war, Picasso experienced an artistic renaissance in Rome, getting to know members of the Futurist and Secessionist movements, said Burggruen while "coming into contact with Renaissance and classic art" and Italian traditional iconography, "in particular the masques of Pulcinella" as he travelled to Naples, Pompeii, Florence and Milan.
He also met his future wife during his Italian travels, Olga Khochlova, a dancer in the ballet.
Masterworks on display include Man Seated at Table and Harlequin and Woman with Necklace, painted in Rome.
Portraits of celebrated dancer and choreographer Leonide Massine and his wife Olga are also part of the display.
Picasso's take on classicism is documented by the Great Bather, the Three Women at the Fountain and the Pan Pipes.
Two Women Running on the Beach, an iconic little painting embodying his neoclassical period, is one of the exhibit's highlights.