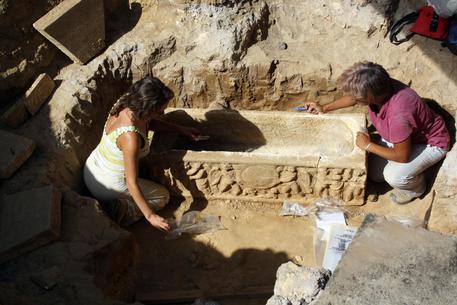 (ANSA) - Rome, August 23 - Two Roman sarcophagi in marble, one of which is decorated in bas-relief, were discovered in the area around Rome's Stadio Olimpico stadium during a preventative archaeological dig at a construction site of public utility ACEA, according to the city's special superintendency.
The finds were most likely burials of children from a well-off Roman family.
"At first analysis, they could be from between the 3rd and 4th century A.D., but dating can only be confirmed after a thorough examination," the special superintendency said.
The tombs were found at a depth of about 2.5 metres on the northwest slope of Monte Mario, behind the stadium's north curve, during work to place utility service pipes underground.
The dig is being led by Dr. Marina Piranomonte with archaeologist Alice Ceazzi, restoration expert Andrea Venier, anthropologist Giordana Amicucci and topographer Alessandro Del Brusco.
The finds were removed and brought to the special superintendency's workshops in Rome for analysis, study, and restoration in the coming months.
The results of the research will be released in the fall.