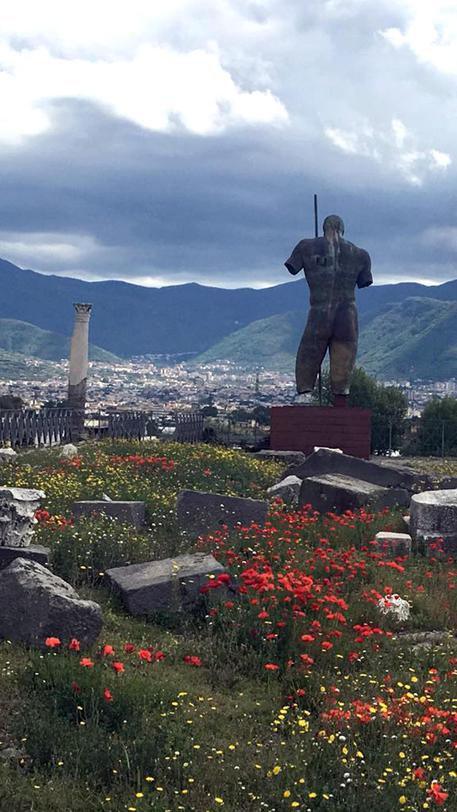 (by Silvia Lambertucci) (ANSA) - Rome, April 21 - Daedalus, a monumental sculpture by late Polish sculptor Igor Mitoraj, will remain in Pompeii permanently after a year-long exhibit at the archaeological site, Italy's Culture Minister Dario Franceschini and Pompeii Superintendent Massimo Osanna have announced.
The sculpture, which was gifted by the Mitoraj Foundation and the Contini Art Gallery, will remain on display at the entrance of the ancient city near the Temple of Venus, where it has been welcoming visitors since May last year as part of a travelling exhibition of 30 sculptures by Mitoraj.
Osanna said the statue is "a symbol of our philosophy - Pompeii as a contemporary location". Pompeii is gearing up to welcome an increasing number of visitors as part of ongoing restoration work.
The European Commission earlier this month announced it was allocating nearly 50 million euros from the European Regional Development Fund for the continuation of renovation and preservation work on the ancient Roman city, a UNESCO world heritage site.
The site is expected to be visited by nearly 200,000 additional tourists a year, after the completion of the restoration.
The exhibit featuring 30 of Mitoraj's large-scale sculptures wraps up in May.
The exhibit, organized under the artistic direction of Luca Pizzi from the Atelier Mitoraj, features sculptures depicting imposing mythological characters showcased in key locations of Pompeii including the Forum, the Gladiators' Barracks and Via dell'Abbondanza.
Pizzi, who worked as Mitoraj's assistant for two decades, said the exhibit and donation were one of the artist's dreams.
"Even when he was at the end, in a hospital in Paris, the maestro pined for the project of an exhibit in Pompeii and asked me to return immediately to Pietrasanta", where he had his atelier, to work on it, said Pizzi.
Mitoraj died on November 6, 2014, before the project was completed.
The statue of Daedalus was selected by the Foundation, art gallery and Pompeii's superintendency among the 30 on display because of its position near the entrance and because the myth of Daedalus is "very much present in the frescoes of the Domus", said Osanna.
A museum dedicated to Mitoraj is scheduled to open in the Tuscan coastal town of Pietrasanta, where the artist lived and worked, Franceschini announced.
The museum will showcase a significant part of the artist's artworks donated to the State and will be initially managed by central and local authorities.
Work to develop the museum in a former market in the city's Via Oberdan will kick off in a few months.
The project is funded by the Italian government with two million euros.