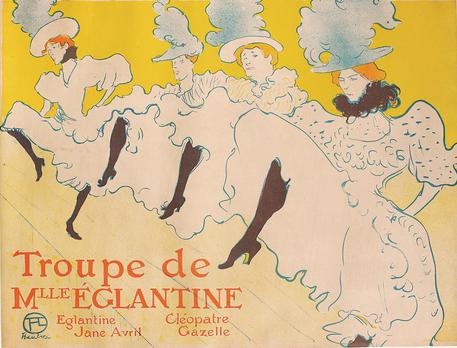 (ANSA) - Verona, March 31 - A new exhibition featuring French painter Henri Toulouse-Lautrec will open at Verona's AMO museum at Palazzo Forti on Saturday, with 170 works on display through September 3.
The exhibition includes posters, lithographs, drawings, illustrations and watercolours along with videos, photographs and period furnishings from the end of the 19th century through the first years of the 20th century.
The show brings visitors back in time by recreating a slice of life during the Belle Epoque, in a bohemian Paris full of artists and emerging talents.
The works on display are on loan from the Herakleidon Museum in Athens.
They include some of the most famous works by Toulouse-Lautrec, such as his "Jane Avril" color lithograph from 1893, and advertising posters such as "The Passenger in Cabin 54" from 1895 and "Aristide Bruant at his cabaret" from 1893.
Toulouse-Lautrec was a prolific painter who died at an early age. He was born in 1884 and passed away in 1901 at just 37 years old.
Verona Mayor Flavio Tosi said the show is part of ongoing programming at the AMO, with the sponsorship of various partners including the Arthemisia Group, the City of Verona and Verona energy company AGSM.
He said the programming aims to show at Palazzo Forti some of the most prominent artists who left their mark on or innovated in the world of modern art.
"It's a show that reaffirms the effort made by the City of Verona's cultural policy in recent years, which has given support to numerous initiatives that have had great public and critical success," Tosi said. "Following Tamara de Lempicka and Pablo Picasso, this show celebrates an eclectic, non-conformist and provocative artist who was linked not only to painting but also to theatre and music," said AMO director Francesco Girondini. Girondini said show curator Stefano Zuffi designed the show to highlight this aspect through music, for example with the voice of Maria Callas in La Bohème, which was written by Puccini in 1895, at the height of Toulouse-Lautrec's artistic activity.
"It therefore reinforces the link between opera, which is at the heart of the AMO museum, and art," Girondini said.