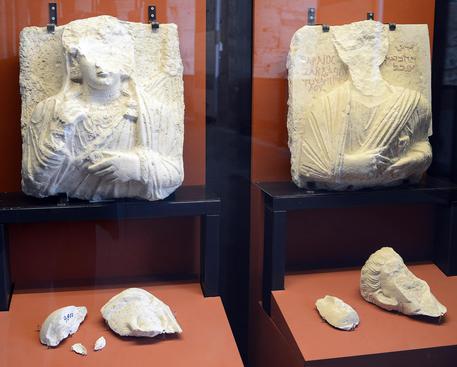 (ANSA) - Rome, February 7 - Two funerary busts from the 2nd-3rd century AD, both icons of the damaged art of the Syrian town of Palmyra that were saved "in extremis" in 2015 from the city's now-destroyed museum, have for the first time left their homes to be temporarily entrusted to Italy for restoration work.
The busts - a male and a female - reached Italy after an adventurous journey across borders and checkpoints, thanks to an agreement between Italy's "Incontro di Civiltà" (Meeting of Civilisations) Association and the Directorate for Antiquities in Damascus. The male bust has damage to the face due to hammer blows inflicted upon it by ISIS, but restorers are preparing a sophisticated 3D print with sintering of nylon powders that will give it back its delicate aristocratic features.
The female bust has been restored fragment by fragment, with a veil that covers the head and jewels that hold a cape on the shoulder. The busts were on display at an exhibition at the Colosseum titled "Reborn from Destruction: Ebla, Nimrud, Palmyra" and are now in the hands of the High Institute for Conservation and Restoration (ISCR), which will return them to Syria at the end of the month.
Former Rome mayor Francesco Rutelli, who also served as Italy's culture minister and deputy prime minister, heads the Incontro di Civiltà Assocation, and called the restoration "a miraculous little operation".
He said the exhibition would continue to other capital cities in the future.