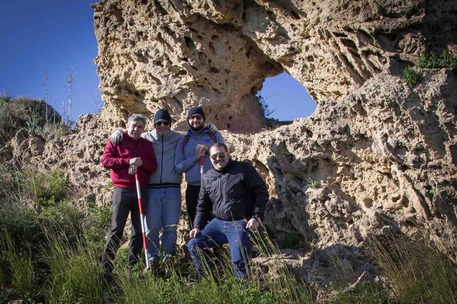 (ANSA) - Gela, January 4 - Archaeologists have found a Stonehenge-like "calendar rock" in Gela, on the southern coast of Sicily, that they say was used as a prehistoric sundial to measure seasons and years during the Bronze Age.
The man-made megalith was found eight kilometres from Gela, near the prehistoric Grotticelle necropolis.
Archaeologists Giuseppe La Spina, Michele Curto, and Mario Bracciaventi made the discovery with the technical support of Vincenzo Madonia, while conducting surveys of WWII-era bunkers along the state road between Gela and Catania.
Professor Alberto Scuderi, a known expert in archeoastronomy and regional director of Italian Archaeologist Groups (GAI), read their report and suggested a scientific confirmation of their discovery.
An experiment was conducted in December at the winter solstice with the help of a compass, cameras, and a video camera mounted to a GPS-equipped drone, which confirmed the discovery was a calendar stone.
The Gela Archaeological Museum will hold a press conference on Thursday, January 5 at 17:00 to discuss the study, with the participation of museum director Ennio Turco and Professor Scuderi as well as astrophysicist Andrea Orlando of the University of Catania, who also directs Sicily's archeoastronomy institute; Francesco Polcaro of CERN; and Ferdinando Maurici, director of the Museum of Terrasini.