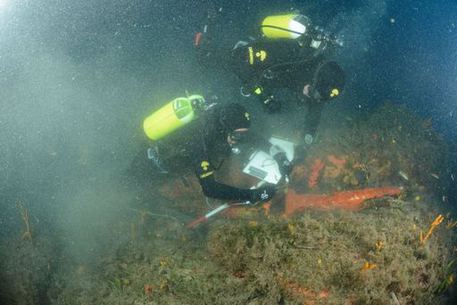 (ANSA) - Olbia, October 6 - Part of an anchor and a clay amphora from the Roman imperial period were recovered on Thursday off the coast of La Maddalena, an island off the north-eastern coast of Sardinia.
The archaeological findings - including a two-meter-long lead anchor and an amphora neck - are believed to have been part of a Roman merchant ship travelling from the Spanish peninsula.
They were reportedly recovered at a depth of 30 meters by scuba divers from the cultural superintendency in the Sardinian cities of Sassari and Cagliari and from the local Carabinieri police unit responsible for the preservation of cultural heritage.