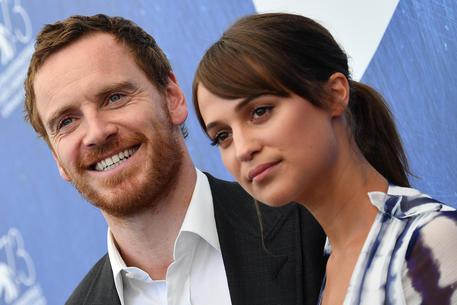 (corrects title of film).
(ANSA) - Venice, September 2 - The second night Thursday of the 73rd edition of the Venice Film Festival saw The Light Between Oceans, adapted from ML Steadman's 2012 bestseller and directed by Derek Cianfrance, take center stage.
Stars Michael Fassbender and Alicia Vikander, best supporting actress Oscar last year for The Danish Girl, took to the red carpet to present the film.
In the movie, Fassbender plays Tom, a World War Two veteran who lives with wife Isabel (Vikander) on an Australian island.
After suffering a second miscarriage, Isabel takes it as a sign when an infant washes ashore in a boat, convincing her husband not to report the incident and raise the baby as their own.
The film, which evolves in a crescendo of tragic developments, will be released domestically by Disney this week with international rollout starting next week.
Also on Thursday, Wim Wenders' 3D film The Beautiful Days of Aranjuez, based on a play by Peter Handke on a man and a woman who discuss love while sitting in a garden on a summer day, premiered at the festival.
The movie is one of a number of German films and co-productions screening at this year's fest.
Another festival premiere Thursday, for the Cinema nel Giardino non-competitive section, was Gabriele Muccino's Summertime, a drama about two young Romans who fly to San Francisco to spend a week with two Americans, a homosexual couple, they barely know.
The festival runs through September 10.