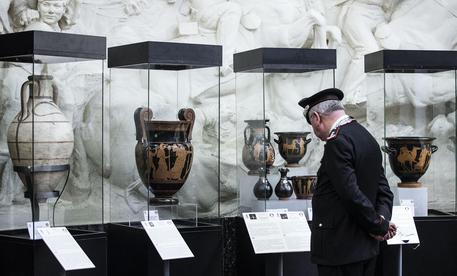 (ANSA) - Rome, June 8 - The letter with which Columbus announced the discovery of the 'New World' to the Spanish royal family, stolen from Florence's Biblioteca Riccardiana and given back a few weeks ago by US authorities is only one of the many important pieces included in the Arte Ritrovata exhibition. Others include a Canaletto and a funerary stele from excavations in Palmyra, which was found in the home of a Padua resident involved in money laundering towards countries in the East.
The key element of the exhibition - which opens on June 9 and runs through July 3 at the Museo Storico dell'Arma - is that all the masterpieces and archaeological finds included have been recovered by the Italian military police Carabinieri's section focusing on artistic heritage protection. General commander of the Carabinieri Tullio Del Sette noted that the works of art and finds are only a small part of what they have recovered and that another, more complete exhibition will soon be held in the capital.
In the meantime, the current exhibition is free of charge.
Some other examples include vases illegally excavated from Magna Grecia sites and found by investigators in the catalogues of New York auction houses or in museums in the US, such as at the Minneapolis Institute of Arts (Minnesota), which had bought it from an Italian dealer and later gave it back to Italy on finding out that it had been of illicit origins. Others include works taken in the 1970s from a house in the countryside near Guidonia Montecelio (Rome) and a large Canaletto that was recovered in 2015 at the Florence train station when it was headed for an auction house in the Principality of Monaco and an important work attributed to Guido Reni that was recovered in a major bank, which the owner of the canvas has accused of misappropriation. The general who leads the Carabinieri's cultural heritage section, Mariano Mossa, noted that they had a large databank that "is often fundamental for our investigations".