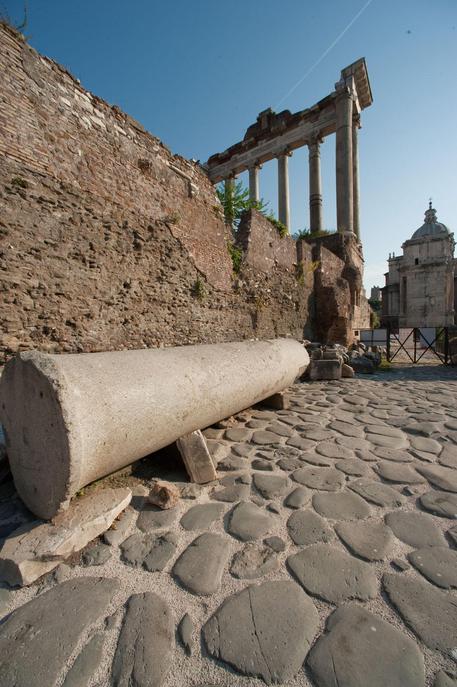 (ANSA) - Rome, March 2 - A ticket desk for the Roman Forum and the Palatine Hill was closed on Wednesday due to a reported rat emergency that has hit the area and the Palazzo Massimo museum near Rome's central Termini station, Archeology Superintendent Francesco Prosperetti said.
Prosperetti said it was a "big problem" that the superintendency "cannot address" on its own. "A rat got trapped in a gap on the roof and the staff member who was working there saw blood drip on the desk," Prosperetti said when asked why part of a new ticket office was closed despite long queues.
The ticket desk, near to the Colosseum, was closed for pest-control operations, he said.
He said that rats were a problem all over the city and that a similar situation at Palazzo Massimo, which is part of the National Roman Museum, had led to a union protest.
"It seems that the increase in rats (at Palazzo Massimo) was caused by work being done in Via D'Azeglio," Prosperetti said. "They told us that the vibrations scare the rats and they come out from under the ground. "We are investigating about the Roman Forum. The area where that ticket office is situated was not frequented by humans for a long time.
"Big rats were the legitimate inhabitants of the grottos of the Temple of Venus".
Prosperetti later played down the problem after it had been highlighted by the media, saying there had been "extremely isolated cases".
"There is no rat emergency either at the Colosseum or at the Roman Forum, which both remained open as normal," he told reporters.
Prosperetti said the presence of rats in Rome was a "well-known (problem), going back years" and said it was "not the superintendency's job to tackle and resolve it". The Forum hosts the ruins of many important ancient buildings, such as the Temple of Caesar and the Arch of Septimius Severus. The nearby Palatine hill includes the ruins of the palaces of emperors Augustus, Tiberius and Domitian.
One of the workers gave her version of events. "We realised yesterday morning. A strong smell was what alarmed us," she said. "We noticed stains on one of the desks. We called our superiors and it turned out that it was rat blood.
"That part of the ticket office was closed and cleared at once.
"The pest-control operation started and they came back for another intervention today". Centre-right Rome Mayor candidate Guido Bertolaso said the case highlighted the state of abandonment of the Italian capital.
"This is the umpteenth awful calling card that we are showing tourists," said Bertolaso, whose chances were hit when Northern League leader Matteo Salvini said that he was no longer backing the former civil protection chief.
"Rome is a city in ruins, where degradation is the norm.
"I say zero tolerance for every form of degradation, not just in my election campaign, but also in my way of governing the city". Consumer group Codacons said the spread of rats around Rome was a "disgrace" and risked causing "an epidemic".