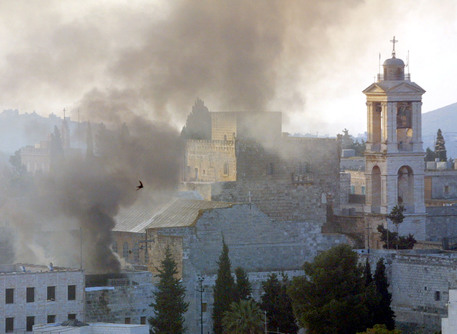 (ANSA) - Bethlehem, 18 December - The ancient Basilica of the Nativity in the Palestinian West Bank city of Bethlehem is being restored by an Italian firm based in Prato.
The church was originally commissioned in 327 AD by the Roman Emperor Constantine and his mother Helena over the site that is traditionally considered to mark the birthplace of Jesus of Nazareth. The original basilica was completed in 339 and destroyed by fire during the Samaritan Revolts in the 6th century, and a new basilica was built in 565 AD by the Byzantine Emperor Justinian.
"The first part of the restoration involved securing the roof," owner Giammarco Piacenti told ANSA of the 15-million-euro restoration project.
Techniques included reinforcing the framework with metal inserts, and a special glue invented in collaboration with Italy's National Research Centre (CNR).
The work is being carried out not just on the structure, but also on the decorations.
"The mosaics are absolutely sublime," said Piacenti, recalling that his family tradition and know-how date back to his great-grandfather Vincenzo in 1875.
"The nature of the work depends on the nature of the building, which in the course of the centuries has been worked on by experts, using the best technology available at the time," he said.
"There are several difficulties working in Bethlehem," Piacenti said of the war-torn area.
"But the Palestinian people have welcomed us with open arms".
Visitors, he said, have included Palestinian National Authority Prime Minister Rami Hamdallah, who stopped by the basilica to meet the restorers and observe the work in progress.
With Christmas just a few days away, the basilica remains open to visitors even though the restorers continue to work within. "We never closed the church, even working nights so pilgrims who come from all over the world can admire its beauty," said Piacenti.