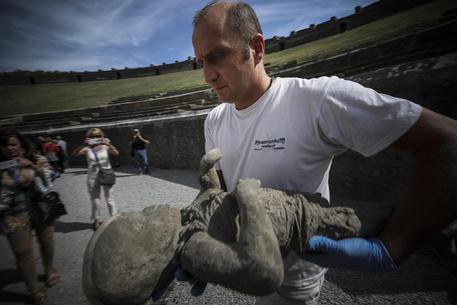 (ANSA) - Pompeii, September 29 - At least some of Pompeii's residents had perfect teeth thanks to a healthy low-sugar diet, researchers said Tuesday after examining CAT scans on 30 chalk casts of the victims of the 79 AD eruption that buried the ancient Roman city.
The 30 sets of teeth were unblemished apart from some wear and tear caused by their habit of cutting or snapping objects with their jaws, the researchers said.
The team sent in by the Pompeii superintendency had to use special 16-layer scanning equipment provided by Philips SpA Healthcare because of the density of the casts.
"One of the problems we encountered was the density of chalk used for the cast technique," said Superintendent Massimo Osanna.
"It is a density similar to bones, that's why we had to use the 16-layer CAT technology".
The project sees archaeologists, anthropologists, radiologists, dental experts and engineers working together on the laser-scanning research.
The aim is to chart the lifestyles, jobs, and social class of the person hidden in the cast.
The team has already found that Pompeians' bones were damaged because of the excessive presence of fluorine in the Vesuvian water table.