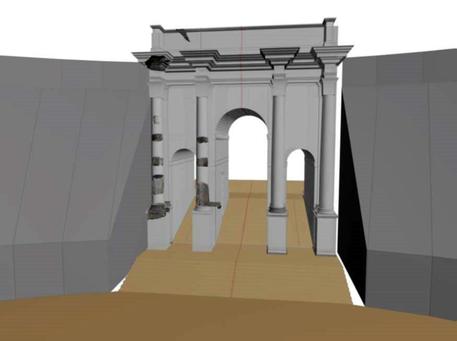 (ANSA) - Rome, May 28 - Archeologists have discovered large Luna marble fragments belonging to a lesser-known Arch of Titus erected by the Roman Senate at the east end of the Circus Maximus in 81 AD, the year of the emperor's death, officials said Thursday. The arch commemorating Titus' victories in the first Jewish-Roman war of 66-73 AD was 17 meters wide by 15 meters deep, with columns about 10 meters tall. Archeologists have so far uncovered its travertine marble paving, three frontal plinths, and part of the fourth column's plinth.
The triple arch surmounted by a bronze four-horse chariot had a staircase descending to the Circus Maximus, its facade decorated with four free-standing columns.
Triumphal processions honoring victorious generals or emperors would parade around the Circus to ovations from the crowds, then pass under the arch and continue on to the Temple of Jupiter Capitolinus - the most important temple in ancient Rome, located on the Capitoline Hill. A better-known Arch of Titus standing in the Roman Forum was built in 82 AD by the Emperor Domitian in memory of his older brother, Titus, one year after his death.