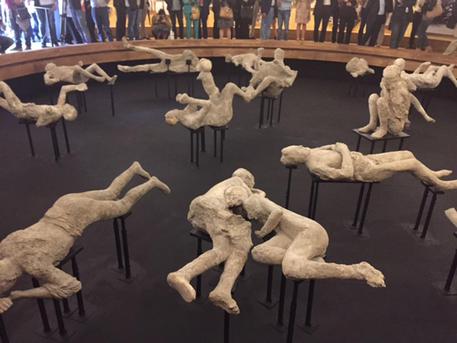 (ANSA) - Pompeii (Naples), May 27 - Prior to cutting the inaugural ribbon of a new exhibition at the famed archaeological site, Culture and Tourism Minister Dario Franceschini said that "today another step has been taken for the rebirth of Pompeii". 'Pompeii and Europe from 1748 to 1943' includes two exhibition areas: one at the Naples archaeological museum with 200 works from important Italian and foreign museums, and one in the Pompeii amphitheater, with 20 casts and previously unseen photos. The exhibition will run through November 2. Organizers call it a "true journey, grandiose and complex, in which the ancient speaks to the modern, nature and archaeology," aiming to show how "Pompeii with its buried ruins and its classicism have fascinated artists across Europe for the past two centuries". Twenty casts are exhibited in the amphitheater of the excavation site under a pyramid-shaped installation, bearing witness to the final moments of life that day in 79 A.D. when the city was devastated by the effects of the eruption of Vesuvius. The exhibition was sponsored by the Special Superintendent's Office for Pompeii, Ercolano and Stabia and the general directorate of the Grande Progetto Pompei, alongside the Naples archeological museum, and was organized by Electa with sponsorship from Expo Milano 2015. The design was by the architect Francesco Venezia. "It was another step for the rebirth of Pompeii," Minister Franceschini said during the inaugural ceremony, stressing the work done by the superintendent's office under Massimo Osanna and by Grande Progetto Pompei general director Giovanni Nistri. "Amid so much skepticism, diffidence and I would even say hostility," Franceschini added, "active work has been done with a collaborative team spirit." In Naples the 200 works of art - ancient finds and modern masterpieces - are exhibited in the Meridiana hall curated by Massimo Osanna, Maria Teresa Caracciolo and Luigi Gallo.
The casts, beginning with those by Giuseppe Fiorelli - located in the excavation site - have been restored and are part of the 'Stolen from Death' section curated by Massimo Osanna and Adele Lagi.
The 'Photography' show curated by Massimo Osanna, Ernesto de Carolis and Grete Stefani instead includes many previously unpublished shots that bear witness to the progress of the excavations between the nineteenth and twentieth centuries. The building of the pyramid in the amphitheater was looked askance at by some. "The large 'Pyramid' in the arena of the Pompeii amphitheater is an improvident use of an area with its own historic identity known around the world," said the head of the cultural heritage observatory, Antonio Irlando. A catalog of the exhibition is available in Italian, English and French, published by Electa and including contributions from both Italian and foreign critics and scholars.