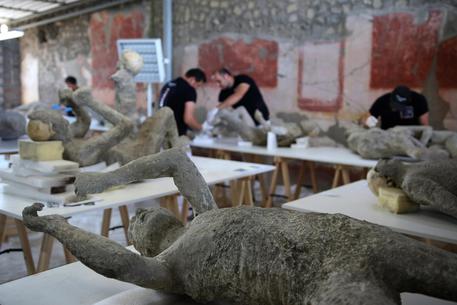 (ANSA) - Pompeii (Naples), May 20 - The exhibition "Pompeii and Europe: 1748-1943" will show the harrowing human agony wrought by the catastrophic eruption of Mount Vesuvius that buried the Roman city in 79 a.d. starting May 26.
Eighty-six casts of victims, all in the final phases of restoration, will be shown in the joint exhibit at the Pompeii archeological site and the National Archeological Museum of Naples.
Teeth protrude from lips stretched from pain. Smoldering, encrusted skin, protruding skulls and bones, exposed jaws were all caught in the moment of death, when a glowing, 300C cloud seared surfaces of the bodies in a single stroke, leaving their insides soft, and burying them under ash and stones. Among them is the family of the House of the Golden Bracelet: a woman with a baby on her lap. Near her is a man and another child, perhaps two years old. "Until now they had never been surveyed, out of a sense of ethics with which these human remains were always treated. No statues of plaster or bronze, but real people who should be treated with respect," said Massimo Osanna, the archaeological superintendent of Pompeii, Herculaneum and Stabiae, who wanted an exhibit of just human victims.
The bodies were brought to light in 1863 by the archaeologist Giuseppe Fiorelli, who devised a technique for detecting the casts of the victims of the eruption and extracting them intact from the excavations. Restorations also include animals, but the remains of a pig and a dog will not be part of the exhibit. Osanna explained that these remains were restored and studied for scientific and archeological purposes.
Osanna said the restorations are taking place as part of the Grande Progetto Pompei (Great Pompeii Project) in which archeologists, restorers, radiologists, engineers and an anthropologist are studying the genetic and anthropological profiles of the victims to better identify them and understand their way of life. The researchers' findings will be published and made into a documentary by the Salerno restoration company Atramentum.