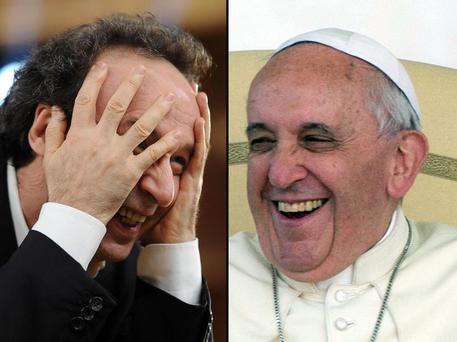 (ANSA) - Rome, May 4 - Oscar-winning actor Roberto Benigni received a standing ovation Monday as he read from Dante in the Italian Senate and Pope Francis praised the medieval poet as a "prophet of hope" as the nation marked the 750th anniversary of his birth.
Benigni received a standing ovation after his reading from Dante's Divine Comedy in the Upper House of parliament, which was attended by President Sergio Mattarella and broadcast live to the nation by state-run RAI radio.
The program also included a new musical homage to the poet by renowned composer Nicola Piovani.
The pope's message said that Dante's works announced the "possibility of redemption and liberation" for humanity with his works that affirmed the love of God and the hope for a new life.
Cardinal Gianfranco Ravasi delivered the pope's message that described Dante as "one of the most illustrious figures of all humanity".
The pope's message added the Florentine was an "artist of the highest universal values who still has much to say and to give through his works (to those who are) willing to follow the way of true knowledge, the discovery of self and the world".
Benigni, who read from the XXIII canto of Dante's Paradiso, said: "The Divine Comedy is a miracle, a work whose beauty takes your breath away".
Events will continue for the next six years until the 700th anniversary of Dante's death, to be marked in 2021, said Senate Speaker Pietro Grasso.
This year, at least 187 events are being staged throughout the peninsula to mark the poet's birthday, including exhibits, concerts, publications, new translations, performances, conferences and readings, especially in Florence, Ravenna, Verona and Rome - the cities most linked to Dante.
More than 173 events have been scheduled outside Italy by Italian Cultural Institutes in foreign cities.
http://popefrancisnewsapp.com/