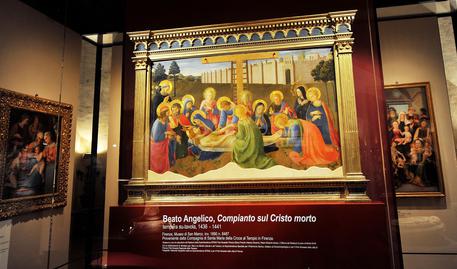 (ANSA) - Turin, April 14 - The rare public presentation of the mysterious Shroud of Turin, said to have been Christ's burial cloth, will be complemented by a famous 15th century painting "The Lamentation of Christ" by Renaissance master Beato Angelico.
The recently restored Lamentation, depicting weeping mourners wrapping Christ's body in the Shroud, has been loaned by the Museum of San Marco in Florence to enhance visitors' experience in Turin.
The painting, which had been damaged by rain when a tornado hit Florence last September, will be displayed from Thursday through June 30.
A special mobile app through Google Play or Apple, offers viewers an audio guide narrated by Timothy Verdon, director of the Duomo museum in Florence, illuminates the panel which was painted between 1441 and 1442.
Experts suggest that Fra Angelico likely saw the Turin shroud before he painted the Lamentation panel, with the result an intense rendering of the moments after Christ's crucifixion The Shroud, which is rarely seen by the public, will be displayed in the Chapel of the Shroud in the crypt beneath the Turin's most important cathedral.
Pope Francis has said that he will visit the shroud on June 21.
The city and Diocese of Turin are preparing for inflows of guests by training some 4,500 volunteers to work with visitors.
In March 2013, soon after he took office, Pope Francis was involved in a broadcast event that showed rare images of the mysterious holy relic to TV viewers.
Francis delivered the opening message in that unusual event on state broadcaster RAI, which marked only the second time the Church has permitted the Shroud to be filmed and broadcast.
In 2010, former Pope Benedict XVI viewed the Shroud of Turin during a special seven-week display that marked the first time the Shroud had been seen by the public since it was restored in 2002.
Before then, it had been on view in 2000 and has been on display only five times in the past 100 years.
Believers say the linen Shroud was used to cover the body of Christ after his crucifixion and countless scientific tests conducted over the years have revealed the outline of the body of a man embedded in the fabric.
The Shroud is normally heavily guarded in a bullet-proof, climate-controlled glass case within Turin's cathedral.
Only once before had images of the Shroud been broadcast as ordered in November 1973 by then-pope Paul VI.
Some sceptics maintain the Shroud is nothing more than an elaborate fake dating from the Middle Ages, triggering centuries of debate over whether the image is truly that of Christ, or a very good forgery.
Radiocarbon-dating tests conducted on the cloth in 1988 suggested it dated from between 1260 and 1390; however, other scientists have since claimed those results could have been distorted by centuries of contamination.
That has led to calls for more testing, which the Vatican has consistently refused.