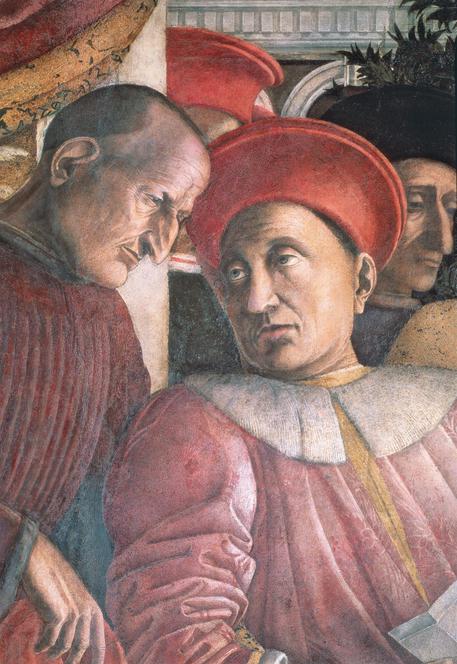 (ANSA) - Mantua, April 2 - One of the most delightfully decorated rooms in the history of Renaissance art has reopened at Mantua's Palazzo Ducale three years after quake damage.
"This is a special day for Mantua and the rest of Italy," said Culture Minister Dario Franceschini as he cut the ribbon on the newly restored Camera degli Sposi (Bridal Chamber).
The restoration project included the addition of a collection of paintings donated by a local businessman and will further enhance "one of the most beautiful cities in Italy," said Franceschini.
Mantua suffered when a series of earthquakes in northern Italy in May and June 2012, with severe aftershocks, caused widespread damage and took 26 lives across a swathe of north-central Italy.
Restoration of the palazzo itself cost about 750,000 euros, authorities have said.
"We are facing one of the masterpieces of the Italian Renaissance," said Franceschini. The Palazzo Ducale complex, built between the 14th and the 17th century mainly by the Gonzaga family, includes some 500 rooms.
But among the most famous is the Camera degli Sposi, which was frescoed by Andrea Mantegna between 1465 and 1474 and has been praised for its use of 'trompe l'oeil' details and its seminally foreshortened 'di sotto in su' ('looking up') ceiling.
The frescoes depict significant meetings and scenes from the court of Ludovico Gonzaga.
The Court Scene on the north wall shows Ludovico Gonzaga, dressed informally, with his wife Barbara of Brandenburg. They are seated with their relatives, while a group of courtiers fill the rest of the wall. The figures are interacting in an 'illusionistically' expanded space.
On the west wall is the Meeting Scene. This fresco shows Ludovico in official robes in an ideal meeting with his son, Cardinal Francesco Gonzaga, the Holy Roman Emperor Frederick III and Christian I of Denmark.
The ceiling features a playful oculus frescoed with cherubs peering down - apparently through the circular opening to a blue sky above - into the room itself.
The palace's superintendent Giovanna Paolozzi Strozzi has said the bridal chamber will be part of a new museum itinerary including the St George castle.
As well, visitors can view the collection of Mantuan businessman Romano Freddi who Strozzi said has given the Ducal palace 85 works including a portrait of Francis IV Gonzaga by Rubens.
The Gonzaga family lived in the palace from 1328 to 1707, when the dynasty died out.
One of its most notable residents was Isabella d'Este, who was born the year the bridal chamber fresco was completed and who became a renowned patron of the arts who sponsored painters including Titian, Raphael, Giovanni Bellini and Leonardo da Vinci.
A portrait of her, attributed to Leonardo and thought to have been lost, was seized in February from a Swiss bank vault.
As well as being a patron of the arts, Isabella was a leader of fashion, whose innovative style of dressing was copied by women throughout Italy and at the French court.
Diplomat Niccolo' da Correggio hailed her as "The First Lady of the world" and the poet Ariosto called her "magnanimous".
She served as the regent of Mantua during the absence of her husband, Francesco II Gonzaga, Marquess of Mantua and the minority of her son, Federico, Duke of Mantua.
In 1500 she met King Louis XII of France in Milan on a diplomatic mission to persuade him not to send his troops against Mantua.
She was a prolific letter-writer, and maintained a lifelong correspondence with her sister-in-law Elisabetta Gonzaga.
Lucrezia Borgia was another sister-in-law; she later became the mistress of Isabella's husband.