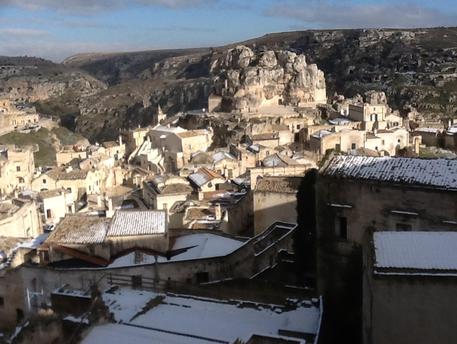 (ANSA) - Matera, January 6 - As the southern Italian city of Matera ended its popular Living Nativity scene set among the city's famous Sassi - the ancient cave dwellings named a UNESCO World Heritage Site - organizers were already preparing for a major 2019 show when the city becomes the European Capital of Culture.
The Living Nativity scene drew almost 30,000 visitors, braving unusually cold weather and even snow, to see some 300 characters re-create the Biblical story of the birth of Christ 2,000 years ago, complete with the pilgrimage of the three wise men following a bright star in the heavens. Organizers say the city may invite Pope Francis to bless the 2015 event amid preparations for the 2019 European festivities that will heavily feature the Sassi, a popular filming site for movies recreating the ancient world of the time of Christ.
The Sassi have been used as the atmospheric setting for films including 1964's The Gospel According to St Matthew by Pier Paolo Pasolini, and Mel Gibson's 2004 The Passion of the Christ.
More recently, some 1,000 extras were chosen from around Matera to play Roman soldiers in the current remake of the blockbuster 1959 film Ben Hur, starring Morgan Freeman and Jack Huston and using Matera as a stand-in for Jerusalem.
Filming is scheduled to begin next month, further heightening the world's interest in Matera and the surrounding region which readily takes visitors back thousands of years via its landscapes of sandstone, deep canyons and in places, thick forests that hide mysterious complex villages and old-world charm.
Matera Mayor Salvatore Adduce has said he hopes to quadruple the flow of visitors over the next four years leading up to 2019 and the European Capital of Culture designation for Matera.
The Living Nativity is an important feature of the city's artistic and cultural life, harnessing the natural allure of the Sassi which at dusk easily turn into a suggestive Bethlehem of 2,000 years ago with the streets, squares and alleys of the old city. The mayor has said the city hopes to invest some 60 million euros in the coming years to prepare for the 2019 event, which will also help to promote all of the Basilicata region with its crafts and traditional food products.