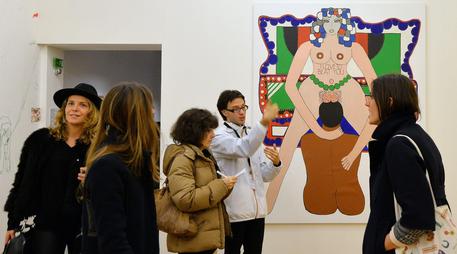 (ANSA) - Turin, November 5 - An Italian artist known around the world for his controversial works has drawn attention once more, curating a Turin exhibition entitled 'Shit and Die'.
Maurizio Cattelan's show is part of Artissima, a contemporary art fair scheduled to run from Thursday until Sunday at the Fiat headquarters in the industrial city, and focuses on death and the banality of evil. The exhibition leaves a sharp impression on visitors. The venue is the beautiful Baroque Palazzo Cavour, filled for the occasion with disconcerting works. Such as real dollar bills totaling 40,000 dollars that cover the walls of the hall and the large internal staircase, the work of Eric Doeringer. The work, called 'The Hug 2014', echoes a similar 2011 show by Hans Peter Feldmann, who with 100,000 dollars from the Hugo Boss Prix plastered the walls of the New York Guggenheim. 'Shit and Die' revolves around death and Turin, a city that for the occasion is made to symbolize beauty and the fatigue of existence, the twentieth-century revolution, industrialization, love of culture and social struggles. Since this past summer, when Artissimia commissioned Cattelan for its opening exhibition, the artist behind 'Dito Medio' and the others he got involved in the project combed Turin for secrets and stories. Cattelan and the others walked the most hidden alleyways, went into cemeteries and both well-known museums and those less so, such as the anatomy museum, the Lombroso museum, the fruit museum and the Mollino house, which has itself become part of the exhibition. The exhibition is a unique one and will undoubtedly have its fans and critics, as is always the case with Cattelan's work. In the exhibition halls - including Cavour's study covered in plastic "to safeguard the spirit of the statesman' - there are the gallows used in Turin until 1863 to hang those condemned to die, photos by Carlo Mollino and Carol Rama, furniture created by the Gabetti-Isola architects for an Olivetti building never built and distorted portraits of Turin 'VIPs' including Mayor Piero Fassino, constitutional law expert Gustavo Zagrebelsky and former Juventus star player Alessandro Del Piero. "The show aims to be 'banal', because everything is banal in life, everything has already been seen. With a few certainties as well, such as shit and death," said Francesco Bonami, a curator working closely with Cattelan. "We've all been there," he said, pointing at a small photo showing Toulouse Lautrec squatting on a Cote d'Azur beach with his trousers down, defecating.