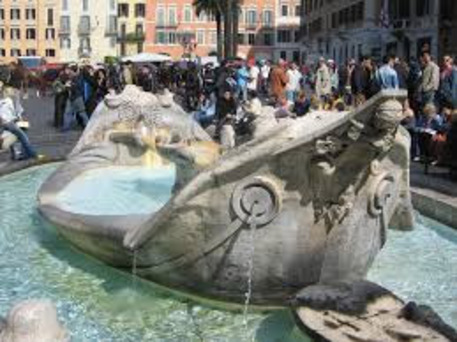 (ANSA) Rome, September 22 - Bernini's famed Barcaccia (Sunken Boat) fountain nestling at the foot of the Spanish Steps was unveiled Monday after a one-year restoration costing 200,000 euros.
Rome Mayor Ignazio Marino, a known art lover who has been raising billions to fund restorations in and around Rome, presided as the fountain - whose gentle splashing famously soothed Romantic poet John Keats as he lay in his deathbed in his home at the foot of the Spanish Steps - was returned to Romans and tourists alike.
Marino and the city's culture pointwoman, Giovanna Marinelli, took the first sips of water to celebrate the event.
"It's a thrill to see the Barcaccia restored," said Marino.
The Baroque fresh-water fountain in the Piazza di Spagna in the shape of a half-sunken ship with water overflowing its bows was commissioned by Pope Urban VIII and was completed in 1627 by Pietro Bernini and his son, Gian Lorenzo Bernini.