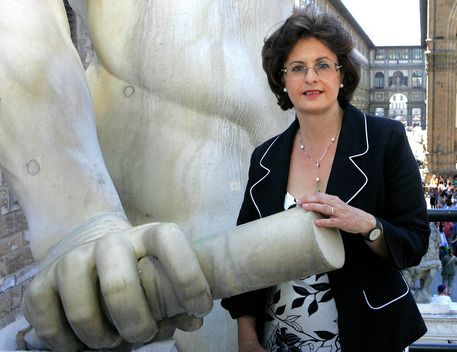 (see related) (ANSA) - Florence, September 22 - The head of Florence's museums, Cristina Acidini, said Monday her decision to quit after a 38-year-long career as a culture ministry official was taken earlier this month because of planned reforms reorganizing the management of Italy's museums.
She insisted the resignation had "nothing to do" with two investigations against her, rejecting the charges.
Acidini, 63, released a statement on Monday saying she had resigned on September 5 from her position after eight years on the job just as news emerged that the art historian is suspected of abuse of office in choosing an insurance company for art works on loan abroad in an ongoing criminal investigation in Florence.
The decision, she said in the statement, was taken because the planned reform does not provide "for a position that can be compared to my current post, which the ministry gave me in October 2006".
She also confirmed the two probes against her while her attorney Nino D'Avirro rejected the charges in a separate statement Wednesday.
Finance police last week reportedly searched Acidini's office over allegations she did not publish a tender request to select an insurance firm despite the fact that the value of the artwork travelling abroad exceeded a European threshold making it mandatory.
Acidini is reportedly under investigation with three other officials.
She is also suspected of irregularities in setting rates for musical concerts in the Boboli Gardens in an administrative case before the Audit Court.
The Florence-born art historian and writer previously served, among other posts, as superintendent of the city's Opificio delle Pietre Dure, Italy's premier restoration institute.