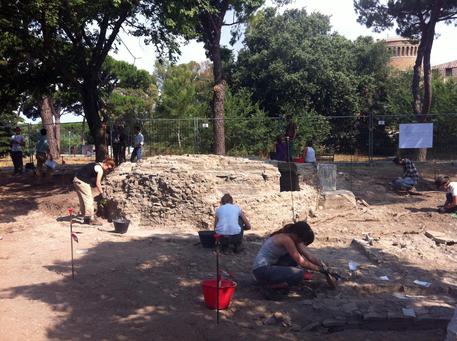 (ANSA) - Ostia Antica, July 21 - A team of Italian and American archaeologists has uncovered the remains of important antique tombs in an ongoing dig near Ostia Antica.
"We've had amazing finds over the past two years at Parco dei Ravennati. This year, we've uncovered more than a dozen early Christian-era tombs arranged close to a central tomb. Our working hypothesis is that the set up of the surrounding tombs suggests the person buried here was of great importance, such as Saint Monica or Saint Aurea, whose church is nearby," Darius Arya, director of the American Institute for Roman Culture, the non-profit organization leading the dig, told ANSA.
Parco dei Ravennati is part of the extensive suburban area surrounding the ancient port city of Ostia Antica. The tombs' discovery could potentially lead to crucial information regarding the Ostia area. "Santa Monica was an early 4th century saint and mother of St. Augustine. Third century Saint Aurea was the patron saint of Ostia,", Arya said.
Additionally, several tombs had funerary inscriptions and archaeologists found a possible tabella defixionum, a lead curse tablet intended to protect the dead and bring anathema to tomb desecrators.
Studies remain ongoing, according to Michele Raddi, excavation co-director, who said "we found a number of fragmentary inscriptions in the tombs as well as a possible tabella defixionum, but we need to evaluate its context and see if it has an inscription".
The excavation site of Parco dei Ravennati covers a 15,000 square meter area where a team of 29 international students, led by Arya and Raddi, work in three locations. In 2013, the team uncover an intact opus sectile (inlaid and colored marble pavement), with this year's excavation revealing more detail including "central geometric motif which is extremely refined", according to Germoni.