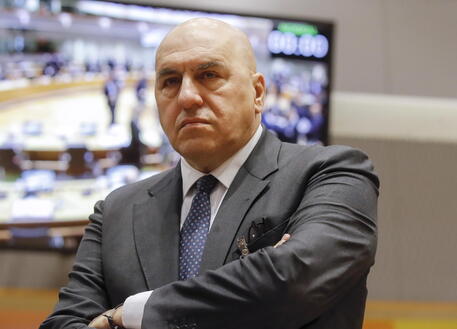 (ANSA) - ROME, DEC 6 - A row has erupted in Italy after a TV current affairs show on Monday night showed footage of a man demonstrating for peace in Ukraine suggesting he would like to see Defence Minister Guido Crosetto hurt.
Interviewed among the protesters called out to the streets by former premier and populist 5-Star Movement (M5S) leader Giuseppe Conte, who is leading a campaign against further Italian arms to Kyiv, the unidentified man said "I wouldn't tear my hair out if something violent were to happen to Crosetto", the official directly responsible for Italy's military policy.
Commenting on the footage shown on Quarta Repubblica on Berlusconi channel Rete 4, Crosetto said "they forget that the weapons sent so far have been approved by five decrees issued by the previous government of which Conte was the biggest supporter, with the largest parliamentary group".
Politicians of most stripes on Tuesday voiced solidarity with Crosetto saying it was unacceptable for the defence minister, a member of Premier Giorgia Meloni's rightwing Brothers of Italy (FdI) party, to be subjected to "pacifist violence".
Even Raffaella Paita, Senate whip for the centrist opposition Italia Viva (IV) party, joined the chorus saying "violence is NEVER justifiable".
Interior Minister Matteo Piantedosi issued a "strong condemnation" of the demonstrator's remark, saying that such shows of sympathy with violence "must be isolated".
FDI said "we will not be intimidated" in backing the government's latest decree to send arms to Kyiv for the whole of next year. (ANSA).