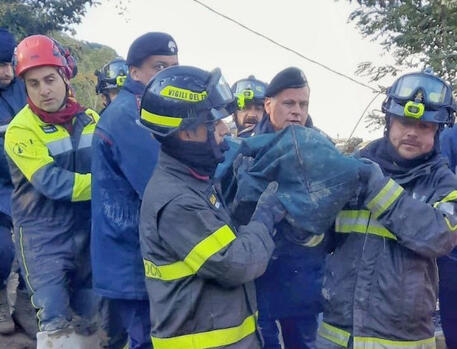 (ANSA) - ROME, DEC 1 - The body of the 11th victim of Saturday's huge landslide on Ischia was found Thursday leaving just one person still missing.
The latest body to be found under the mud is that of a woman, local sources said.
She was located like the others in the town of Casamicciola.
Earlier Thursday rescue workers found the bodies of two more victims on the Gulf of Naples island.
It was initially only possible to get one of the bodies out of the mud that it was buried under.
That corpse belonged to a man and may be Gianluca Monti, whose three children are among the confirmed dead.
Monti's partner, Valentina Castagna, was then still unaccounted for but she may now be the eleventh victim, sources said.
The position of the other body had been found but had not been extracted from the mud at the time of writing. It may belong to Salvatore Impagliazzo, the partner of Eleonora Sirabella, the first confirmed victim of the disaster.
Civil Protection and Sea Policies Minister Nello Musumeci said Thursday that Saturday's landslide had affected 900 buildings in the town of Casamicciola.
Reporting to the Lower House on the disaster, he said five people had been injured, including one who is a critical condition in Naples' Cardarelli hospital.
He said 45 buildings had been declared completely unfit for use and 290 people had been made homeless by the landslide.
He said they were being put up in hotels or had found other accommodation solutions.
He said people unable to access their homes or places of business would be able to request a suspension in their mortgage payments. (ANSA).