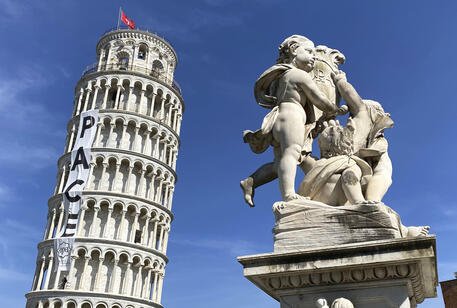 (ANSA) - ROME, NOV 30 - The Leaning Tower of Pisa is in excellent health, the local heritage protection agency said Wednesday.
"Considering it is an 850-year-old patient with a tilt of around five metres and a subsidence of over three metres, the state of health of the Leaning Tower of Pisa is excellent," said Opera Primaziale Pisana.
It was issuing the results of the latest check-up on the iconic landmark 21 years after an intervention that pulled it slightly back upright in 2001.
"As (then project leader) Michele Jamiolkowski stressed," said Pierfrancesco Pacini, the president of the Primaziale, "the Tower's stabilization was a full blown and difficult challenge for geotechnical engineering due to the fact that the interventions at the foundations could have been dangerous and so the use of conventional technologies like cement injections or sub-foundation work bore an unacceptable risk".
The legendary Pisan monument is stable and has slowly lost a tiny bit of its trademark tilt, a group of researchers monitoring the Tuscan monument said recently.
The tower lost a reported 4cm of its tilt in the past 20 years and its health is better than forecast by an international committee coordinated by Jamiolkowski between 1993 and 2001, which planned and coordinated consolidation work, the surveillance group led by Salvatore Settis, Carlo Viggiani and Donato Sabia said.
Nunziante Squeglia, a professor of geotechnics at the University of Pisa who cooperates with the monitoring group, said that the tilt has decreased thanks to stabilization work, along with "oscillations now varying at the average of 1/2 millimeter a year, although what counts the most is the stability of the bell tower, which is better than expected".
The group's activities, which are funded by the non-profit Opera della Primaziale Pisana, include monitoring the tower and improving the quality of conservation measures, as well as promoting research on the monument.
At least one Italian official thinks the tower will one day straighten up, thanks to modern engineering.
Giuseppe Bentivoglio, technical director of the monument, said the 56-meter bell tower's lean towards the south is shrinking thanks to an 11-year restoration project completed in 2001.
The free-standing cathedral tower began tilting during construction, in the 12th century, because of an inadequate foundation on ground that was too soft on one side.
The tower was saved from toppling in a decade-long engineering project in the 1990s, reopening to the public in December 2001.
The reopening was made possible thanks to a 53-billion-lire project - involving steel girdles, lead weights, and a heap of digging - that straightened the tower by 40cm, hauling it back to the position it had in the mid-19th century.
Before the efforts to reverse the lean, the eight-storey tower was adding an average of 1mm a year to its 4.5-metre lean out of the perpendicular.
The tower was begun in 1174 but was only completed in 1350, when its tilt was already about half what it is today.
In a 2005 check-up on the tower's health, experts pronounced it safe for the next three hundred years. (ANSA).