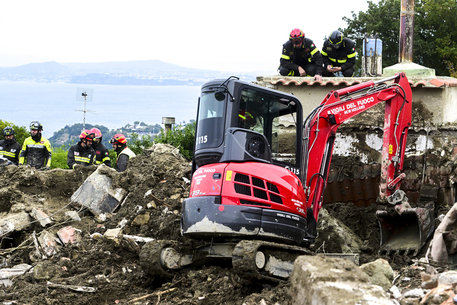 (ANSA) - ROME, NOV 30 - Some 314 local high-school students have turned into 'mud angels' and are leading clean-up and search efforts on Ischia after a massive landslide left eight dead and four still missing on the Bay of Naples island.
The students have been told they may have to give up their efforts and return to distance learning Thursday but local officials at the small towns of Casamicciola and Lacco have asked for them to be given an extension of their mud-sifting duties.
The term 'mud angel' was first used for the hundreds of students who helped the massive relief effort after disastrous floods in Florence in 1966.
The death toll from Saturday's landslide on the Gulf of Naples island of Ischia rose to eight this week when the body of another victim, a 15-year-old boy, was recovered, as rescue workers continued the search for four people who are missing.
The eighth victim was named as Michele Monti.
The bodies of his younger siblings, Francesco and Maria Teresa, were found on Sunday and his parents, Gianluca Monti and Valentina Castagna, are among the people who are unaccounted for.
A newborn baby is also among the confirmed victims of the disaster.
Five people are injured and 230 are homeless after a massive avalanche of mud and debris hit the town of Casamicciola Terme following intense rain.
On Sunday Premier Giorgia Meloni's cabinet declared a state of emergency on the island and approved an initial allocation of two million euros in funding to address the aftermath of the landslide. (ANSA).