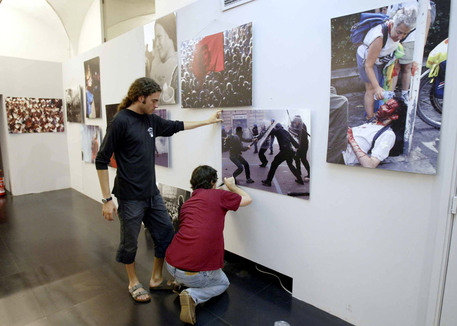 (ANSA) - ROME, NOV 29 - A Paris high court hearing on the extradition from France to Italy of an 'otherworld' anti-globalist militant convicted of violence at the G8 summit in Genoa in 2001 was postponed again on Tuesday.
The Paris Cassation Court said it needed more time to consider Italy's extradition request for Vincenzo Vecchi.
A European arrest warrant was issued in 2016 so that Vecchi, who has lived in France for many years, could return to Italy to serve a 10-year prison sentence served on him.
Vecchi, 52, was born in Calcinate near Bergamo in the early 1970s.
As an adult, he worked as a gardener in Mornico al Serio before moving to Milan, where he became active in local anarchist and environmentalist groups during the 1990s.
Since 2011, he has lived in Brittany, in France, where he has worked as a building painter.
In July 2012, the Italian Supreme Court of Cassation sentenced Vecchi in absentia to 10 years incarceration on charges of having committed "devastation and pillage" during the 2001 protests which marred the G8 and spurred police brutality.
In November 2019, the Rennes Court of Appeal ordered his release from detention, ruling that there had been irregularities in the issuing of the European Arrest Warrant for him.
In November 2020, the Angers Court of Appeal refused an extradition order for Vecchi, ruling that the charges of "devastation and pillage" had no equivalent in France and that the Italian court had not clearly proved that he was complicit in several of the incidents that it had charged him for.
In 2021, the French Court of Cassation referred the case to the Court of Justice of the European Union.
In July 2022, this European Court of Justice issued its opinion : in spite of the two previous judgements of Rennes and Angers, it maintained that the differences between the definitions of criminal infractions in the different European countries are not sufficient reasons and that Vecchi should therefore be extradited.
In the followings weeks, a lot of protests were staged in French political and intellectual circles, notably, in late September, a communiqué from la « Ligue des Droits de l'Homme » (League for the Human Rights) In early October, several Op-ed articles were published in French and Belgium daily papers, particularly a column in "Le Monde" co-signed by the French writer and Nobel laureate Annie Ernaux, defending Vecchi from extradition. (ANSA).