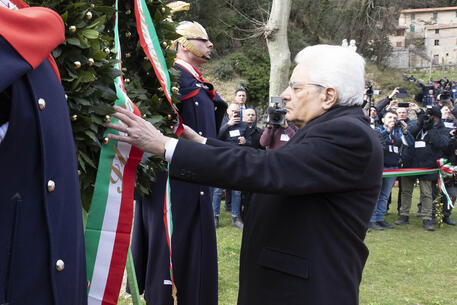 (ANSA) - ROME, AUG 12 - President Sergio Mattarella on Friday marked the 78th anniversary of the World War II Nazi massacre in the Tuscan village of Sant'Anna di Stazzema.
On August 12, 1944, 560 unarmed people were murdered, including 130 children.
It was the second worst WWII Nazi atrocity in Italy after the September 1944 Marzabotto massacre which killed over 770 people.
"Seventy-eight years have passed since the days of the Nazi-Fascist massacre committed in the 'frazioni' of Stazzema," the head of State said.
"Horror struck our lands, our people, as testimony to the effects of perverse enemy ideologies on the dignity and liberty of people.
"The killers, officers and soldiers of the SS who carried out the massacre helped by local Fascists, showed to the full their inconceivable inhumanity, striking hundreds of innocent people, slaughtering the elderly, women, and children, exterminated with ferocity, leaving martyred and burnt bodies".
He said "the memory of the Sant'Anna di Stazzema massacre is, for the whole of Europe, a constant impetus to maintain in first place the issue of respect for people's lives, peace as the necessary historic horizon, and participation in common prospects for life and development.
"The deep mark of such a great horror is carved in indelible characters in the conscience of the Republic.
"From the reaction to that abyss came the moral and civic redemption of our people, the second Risorgimento of our country.
"This laid down the roots of a civil co-existence which found its pillars in the Constitution".
Mattarella concluded: "The Italians owe great recognition to the few surviving witnesses, to the victim's relatives, to those who worked over the years to reconstruct circumstances and events, to recompose individual stories.
"Their testimony has been precious, helping to build a living memorial, closely linked to the values and principles that regulate the life of our community: a permanent warning to the generations to come". (ANSA).