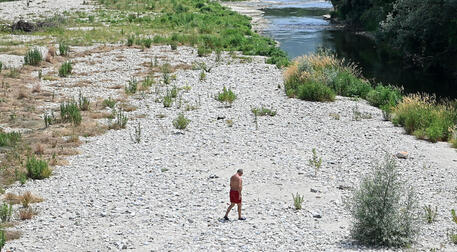 (ANSA) - ROME, JUL 26 - Piedmont has run out of water reserves due to Italy's severe drought, a regional official said on Tuesday.
"We have to save every litre of drinking water that is available because the reserves have run out," Environment Chief Matteo Marnati told a news conference.
"The water that is coming down is glacier water, which, unfortunately, is due to the melting of glaciers.
"So it's not good news because water is arriving, but we are losing our reserves".
Marnati said Piedmont was preparing a Marshall Pan for its water infrastructure with investments of close of one billion euros up to 2026.
The drought and a series of heat waves is causing massive problems for agriculture, with farmer's association Coldiretti reporting drops in crop yields of up to 45% in some cases.
Last week Lombardy Governor Attilio Fontana said that his region has almost run out of water for agriculture due to the drought.
Veneto Governor Luca Zaia said Tuesday that saltwater intrusion has reached as far as 21 km from the mouth of the River Po for the first time due to the drought.
He said saltwater intrusion usually only reached 300-400 metres from the river mouth.
Scientists say that extreme weather events like the heat waves that are currently hitting many parts of Europe, supercharged storms, flooding and droughts are becoming more frequent and more intense because of climate change caused by human activity.
(ANSA).