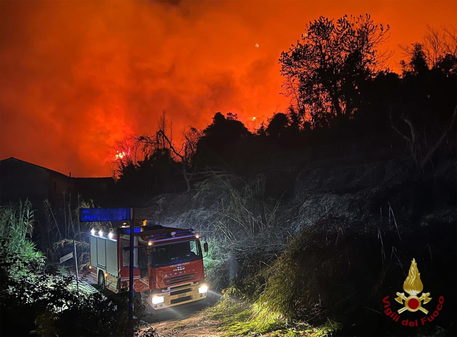 (ANSA) - ROME, JUL 22 - Italian firefighters conducted 32,921 operations to combat blazes involving forests and vegetation between June 15 and July 21, 4,040 more than in the same period last year, according to data released on Friday.
In this period 141,566 firefighters and 53,587 fire engines and other vehicles were involved in these operations, which lasted a total of 39,753 hours.
The fact that the situation is worst this year than in 2021 is especially alarming as a report presented on Friday said that Italy was the European country worst-hit by wildfires last year.
"Italy was top in Europe and second in the world in 2021 for the number of fires registered, 1,422, for a total of 160.000 hectares of surface area burned," said Chiara Cadeddu, a researcher at Rome's Università Cattolica, as she presented the study.
"It was the highest number registered in the last decade. But we expect worse data this year".
The report regarded the Italian situation in a document entitled Climate Change Is A Health Crisis compiled with the Italian Institute for Planetary Health (IIPH).
This week has been particularly bad for wildfires in Italy.
Over 1,000 people had to be evacuated from their homes because of a massive wildfire that devastated the Versilia area of Tuscany, burning over 868 hectares of land.
On Thursday a female civil protection volunteer was killed by a falling tree while fire fighting in Friuli Venezia Giulia, where there have been several wildfires.
A huge one in the Carso area halted road and rail traffic in the area and on Wednesday it forced Italian ship-builder Fincantieri to close its plant at Monfalcone after the northeastern city was invaded by the smoke.
The severe drought Italy is enduring and a series of heat waves have created conditions that make it easier for fires to spread fast.
Drought and heat waves are among the extreme weather events that scientists say are becoming more frequent and more intense due to climate change caused by human activity. (ANSA).