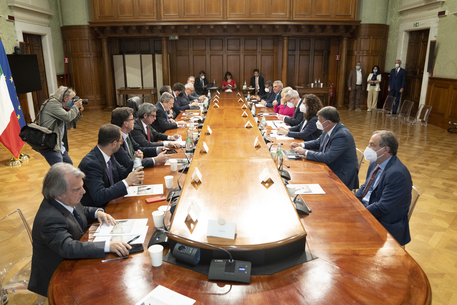 (ANSA) - ROME, JUL 12 - The government will present proposals to Italian trade unions on a cut in the labour tax wedge, wage hikes to keep pace with rising inflation, and improving precarious employment in formal talks starting July 23, participants at a meeting Tuesday between Premier Mario Draghi and union federations CGIl, CISL and Uil said.
Draghi and various competent ministers met with CGIL leader Maurizio Landini, CISL chief Luigi Sbarra and Uil head Pierpaolo Bombardieri.
Landini was among the most pessimistic after the gathering saying "there are not yet any answers to our problems from the government".
But he said he would reserve full judgement until he hears exactly what the proposals are.
Landini, whose CGIL is Italy's biggest and most leftwing union, said "today there were novelties in the method, but we are awaiting solutions".
Sbarra hailed the government's "commitment to structured and permanent talks".
He called for a budget adjustment to fund pro-labour measures amid the cost of living crisis.
CSIL sources said the government had promised a decree to boost incomes and help families with rising living costs shortly.
Bombardieri called for action on the energy bill and pension emergencies and tax breaks on pay increases.
Tuesday's talks also involved Labour Minister Andrea Orando of the centre-left Democratic Party (PD), Industry Minister Giancarlo Giorgetti of the rightwing League party, Civil Service Minister Renato Brunetta of the centre-right Forza Italia (FI) party, and Farm Minister Stefano Patuanelli, whose populist 5-Star Movement (M5S) has said it may pull support from the government unless a set of policy demands including a minimum wage and tax wedge cut are implemented.
Economy Minister Daniele Franco is at financial meetings in Brussels. (ANSA).