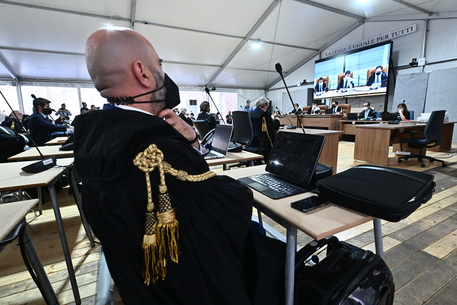 (ANSA) - GENOA, JUL 7 - The first hearing of the trial into the collapse of the Morandi bridge in Genoa on August 14, 2018, a disaster that claimed 43 lives, opened in the Ligurian city on Thursday.
In total, 59 people are on trial, including the former heads and technical officials of highways company Autostrade per l'Italia (ASPI) and its maintenance arm SPEA, former and current transport ministry managers and other civil servants.
The charges range from culpable failure to comply with one's duty for workplace safety to multiple culpable homicide.
The prosecution says that many of the defendants knew that the motorway viaduct could collapse but did nothing to prevent this from happening.
ASPI and SPEA are no longer involved in the criminal trial after a plea bargain to pay damages of around 30 million euros.
The remains of the Morandi bridge were demolished and another viaduct designed by Genoese architect Renzo Piano opened in August 2020 to take its place. (ANSA).