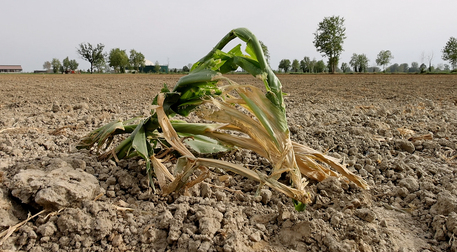 (ANSA) - ROME, JUN 27 - Lombardy Governor Attilio Fontana said Monday that Italy's severe, ongoing drought, which is hitting the north especially hard and causing huge problems for agriculture, is the worst his region has ever experienced.
"A water crisis like this has never occurred in the history of Lombardy," said Fontana after Lombardy declared a drought state of emergency on Friday.
The Lombardy decree, in force until September 30, urges all citizens to "use water in an extremely parsimonious, sustainable and effective way, limiting its consumption to the minimum indispensable".
Related to the move, Milan said at the weekend that it was turning off its fountains, although not its drinking-water fountains.
Civil Protection Department Head Fabrizio Curcio told Sky Tg24 on Monday that the volume of water in the Po, Italy's longest river, was up to 80% lower than usual.
He put this down to recent rainfall levels being 40-50% lower than the average for recent years and winter snowfall being 70% down.
He said the central government was working on the criteria and the related measures for the state of emergency set to apply in Lombardy and other regions where it will be declared due to the drought.
Curcio added that it was not possible to rule out water rationing during the day.
The drought alert has spread from the Po valley to central rivers like the Arno, the Aniene and the Tiber, which have half the water they normally do at this time of the year, officials said recently.
The Po drought threatens over 30% of the national farm output.
Farmers association Coldiretti said last week that the damage is currently estimated at over three billion euros.
Restrictions on the use of water have already been imposed in some areas and many towns are having to have water brought in by trucks.
In some, water is being closed off completely at night.
More frequent and intense droughts are among the consequences of human-caused climate change, scientists say. (ANSA).