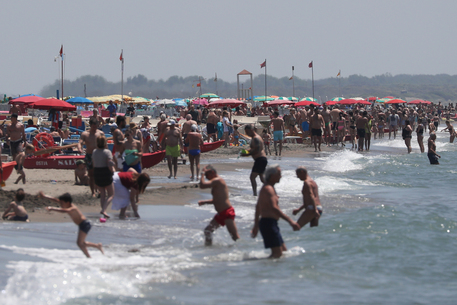 (ANSA) - ROME, JUN 23 - The Mediterranean is enduring a marine heat wave (MHW) and the temperature on May 10 was four degrees higher than the average for the 1985-2005 period, according to the initial results of the CAREHeat project.
The surface water temperature hit peaks of over 23° Celsius, according to the findings.
The project, financed by he European Space agency and featuring the participation of Italian research agencies ENEA and CNR, seeks to develop strategies to identify MHWs and determine their effect on marine ecosystems and economic activities such as fishing.
The results confirm the findings of last month's Mare Caldo (Hot Sea) report report by Greenpeace, which said Italy's seas are feeling the effects of the climate crisis in a big way, with rising water temperatures causing drastic changes to marine biodiversity.
The second edition of the Mare Caldo report said species that are sensitive to the special nature of Italy's seas are disappearing while species that are better suited to warmer waters, often alien ones, are proliferating.
Among other things, this research detected an abnormal sea water "heat wave" in June 2020 off the island of Elba and in the protected marine area of Portofino, with temperatures climbing by 1.5 degrees centigrade from their monthly average within days and staying at that level for a period of three weeks. (ANSA).