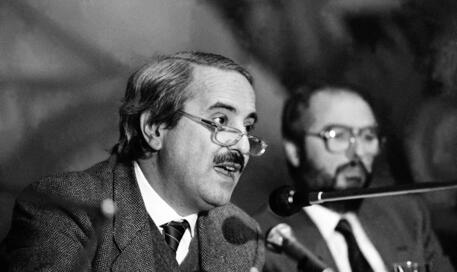 (ANSA) - ROME, MAY 20 - Two-thirds of Italian people consider Giovanni Falcone a hero who went above and beyond his duties as a servant to the State, according to an IPSOS poll released ahead of the 30th anniversary of the anti-mafia prosecutor's murder by Cosa Nostra in the the Capaci bomb attack in 1992.
Over half of the people surveyed, 58%, are convinced that Falcone knew the Sicilian Mafia was going to kill him.
And 71% said he was left to fight the Mafia on his own.
Around 42% think the full truth about his murder has not be revealed.
The huge bomb attack on the A29 Trapani-Palermo highway also killed Falcone's wife Francesca Morvillo and three members of his security detail, Vito Schifani, Rocco Dicillo and Antonio Montinaro, on May 23, 1992.
Falcone was 53 when he died.
Falcone's friend and colleague Paolo Borsellino was killed two months later by another huge Cosa Nostra bomb. (ANSA).