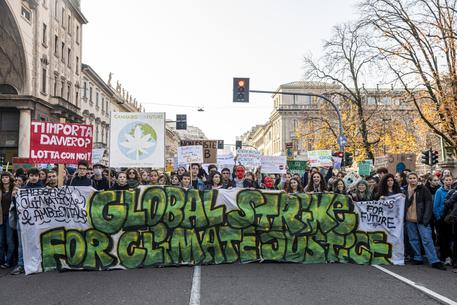 (ANSA) - ROME, MAY 20 - Environmentalists expressed shock on Friday after the homes of three Italian Fridays For Future activists were raided on Thursday following a complaint filed by Russian energy giant Gasprom.
In the dawn raids, the police reportedly seized a variety of items, including mobile phones and a peace flag, and one of the activists was quoted as saying he was made to strip naked and do press-ups to prove he was hiding nothing.
Fridays For Future Italia said the three are accused of vandalizing the offices of a Gasprom subsidiary during a protest on March 19.
In a statement, Fridays For Future Italia said the raids were disproportionately heavy-handed, especially as they came two months after the protest.
"In voicing its support for the activists involved, the #FridaysForFuture global movement highlights the intimidatory intent of the operations," a statement said.
"What has happened makes one reflect once again on the difficulty our country has in receiving the demands of the environmental movements, which, with their protests, highlight the ecocidal potential of the current energy policies based on fossil fuels, which is all the clearer in a climate of war...
"The intimidation will not stop the climate movement".
Italy's Green Europe party expressed "perplexity" about the raids.
"It is clearly an intimidatory act that aims to gag the ecological movement," said Green Europe spokespersons Angelo Bonelli and Eleonora Evi, and MP Cristian Romaniello in a joint statement.
"If what reportedly happened is confirmed, it would be of unprecedented seriousness and, for this reason, our lawmakers will present a question in parliament to ask the government to clarify what happened.
"The young activists have all our support and solidarity".
(ANSA).