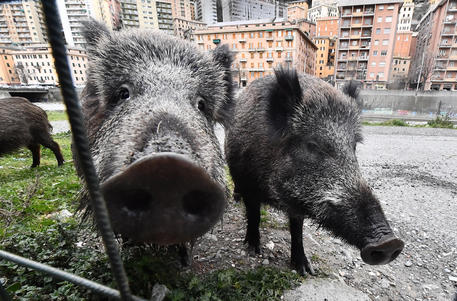 (ANSA) - ROME, MAY 13 - Health Undersecretary Andrea Costa said Friday that the government is working on a plan to cull wild boar, after several cases of swine fever were detected in Rome and with the animals becoming increasingly brazen about their encroachments into residential areas as they forage, especially in the capital.
"The plan for the selective cull of wild board is coming," Costa told ANSA.
The undersecretary said the plan was being prepared by the health ministry and environmental-protection institute ISPRA together with the regions affected by the swine-fever outbreak, Liguria, Piedmont and Lazio.
Costa added that a cull would be needed even without the swine-fever problem.
"We have to reduce the number of boar to protect our agriculture and avoid risks for citizens' safety," he said.
"The population density of wild boar in some areas of Italy is five times higher than can be sustained by the ecosystem.
"Aside from the temporary factor of the swine fever, I remain convinced that, while respecting the sensibility of animal-rights campaigners, this is an emergency that makes it necessary to extend the hunting season from three to five month and allow regions to reset (hunting) quotas".
The Rome cases are the first outside the area of the original outbreak in Liguria and Piedmont.
African swine fever is a highly contagious and deadly viral disease affecting both domestic and feral swine of all ages.
ASF is not a threat to human health and cannot be transmitted from pigs to humans.
It is not a food safety issue. ASF is found in countries around the world.
Romans are "hostages to wild boar", farm group Coldiretti Lazio chief David Granieri said last week, citing the case of a woman attacked in the Italian capital by a herd of eight boar including six piglets.
The presence of over 20,000 boar in Rome and its surrounding province, and more than 100,000 in the whole of Lazio, has brought about "an unacceptable and out of control situation," said Granieri, citing over two million euros in damage wrought recently.
In the capital, a family of 12 wild boar strolled through traffic recently spurring a video that went viral on the Web in the latest in a slew of such sightings over the past few months.
(ANSA).