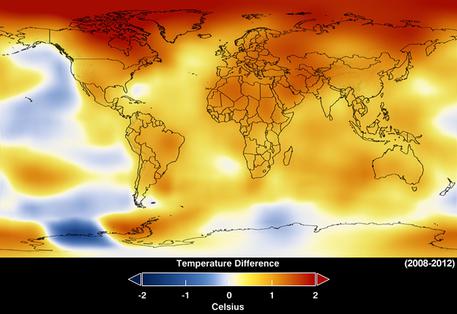 (ANSA) - ROME, MAY 10 - An alarming report released by the World Meteorological Organization (WMO) is a wake-up call for humanity to take immediate action to tackle the climate crisis, Italian activists said on Tuesday.
The WMO report said there is a 50:50 chance of the annual average global temperature temporarily reaching 1.5 °C above the pre-industrial level for at least one of the next five years, adding that the likelihood is increasing with time.
There is a 93% likelihood of at least one year between 2022-2026 becoming the warmest on record and dislodging 2016 from the top ranking, according to the Global Annual to Decadal Climate Update, produced by the United Kingdom's Met Office, the WMO lead centre for such predictions.
The chance of the five-year average for 2022-2026 being higher than the last five years (2017-2021) is also 93%, it said.
"The window of time to avoid climatic, environmental, social, economic, financial and political impacts even more devastating and destructive than the current ones is shrinking every day we fail to take bold, concrete action towards a real net-zero carbon, regenerative economy for humanity and our planet," said Dr Paola Fiore, the national coordinator of the Italian section of the Climate Reality Project.
"We need a real transformation at all levels of society.
Everyone has the moral imperative to act and take their share of the responsibility," Dr Fiore told ANSA.
"Climate scientists and the World Meteorological Organization keep updating and warning us about the climate and health crises.
"As now there is the 93% probability that at least one year from 2022-2026 will be the warmest on record, which means in the next five years the safest scenario for humanity to stay below 1.5°C might be forever lost".
As in the rest of the world, the climate crisis is already having a massive impact in Italy.
Northern Italy, for example, is suffering a major drought that, among other things, has caused big problems for farmers and affected hydroelectric energy production.
Italy is being hit with intense heat waves with increasing frequency, which is affecting people's health and contributing to a rise in the number of wildfires the nation suffers.
A European record temperature of 48.8 degrees C was recorded in Sicily last August.
"Governments and fossil fuel companies all over the world have delayed climate action, convincing the public that we have time until 2050 to act on climate change" Filippo Sotgiu, a mathematics student and climate activist with Fridays For Future Italia, told ANSA.
"This report brings us back to reality: we don't have that much time.
"Huge emissions reductions must be achieved by 2030 - and rich countries like Italy and the UK must get close to zero emissions by that date - because otherwise, nothing will stop the temperature rise that is bringing us near to dangerous tipping points, earlier than expected".
The WMO report said that the chance of temporarily exceeding 1.5°C has risen steadily since 2015, when it was close to zero. For the years between 2017 and 2021, there was a 10% chance of exceedance. That probability has increased to nearly 50% for the 2022-2026 period.
"This study shows - with a high level of scientific skill - that we are getting measurably closer to temporarily reaching the lower target of the Paris Agreement on Climate Change," said WMO Secretary-General Prof. Petteri Taalas.
"The 1.5°C figure is not some random statistic. It is rather an indicator of the point at which climate impacts will become increasingly harmful for people and indeed the entire planet.
"For as long as we continue to emit greenhouse gases, temperatures will continue to rise.
"And alongside that, our oceans will continue to become warmer and more acidic, sea ice and glaciers will continue to melt, sea level will continue to rise and our weather will become more extreme.
"Arctic warming is disproportionately high and what happens in the Arctic affects all of us." (ANSA).