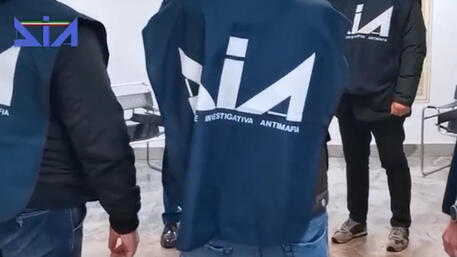 (ANSA) - ROME, MAY 10 - Police on Tuesday staged a massive operation in Rome and in other parts of Lazio and in the southern region of Calabria related to a probe by the national Antimafia Investigative Directorate (DIA) into the criminal activities of the 'Ndrangheta.
Police executed warrants limiting the freedom of 43 people, some of whom are accused of belonging to a Rome branch of the Calabria-based 'Ndrangheta that is embedded in the capital.
This section of the crime syndicate allegedly sought to gain control of legal businesses in sectors ranging from fish, bakeries and pastry retailers and the recycling of used leather and cooking oil.
In the Calabria operation linked to the probe 29 people were taken to jail and five were put under house arrest.
These included Antonino Gioffé, the mayor of the town of Cosoleto, in the province of Reggio Calabria.
Coldiretti farm group said criminal activity in the food sector ranging from pastry shops to fishmongers had risen to 24.5 billion euros a year.
In the Rome part of the op, police said the 'ndrina (chapter9 involved was run by two bosses who had got the go-ahead from the mother clan in Calabria, Antonio Carzo and Vincenzo Alvaro, both members of historic 'Ndrangheta families from Casoleto and Sinopoli in the province of Reggio Calabria.
A police wiretap caught Alvaro saying "we are a caravan to make war", police said.
In Calabria, top members of the Alvaro 'cosca' from Sinopoli were arrested including Carmelo Alvarao aka "Bin Laden", Carmine Alvaro aka "u cuvertuni", believed to be the chief in Sinopoli, and the local heads at Cosoleto, Francesco Alvaro aka "ciccio testazza", Antonio Alvaro aka "u massaru", Nicola Alvaro aka "u beccausu" and Domenico Carzo aka "scarpacotta".
The individuals arrested and placed under investigation said "we in Rome are an offshoot of down there (in Calabria)", a police wiretap recorded.
Police said some 24 companies, restaurants, bars and fishmongers in the north of Rome and in particular the Primavalle quarter had been seized.
'Ndrangheta has spread from its Calabrian heartlands to the rest of Italy, Europe and around the world, and is considered Italy's richest and most powerful mafia due to its control of the European cocaine trade from South America.
'Ndrangheta (from a Greek word meaning 'heroism' or 'virtue') once lived in the twin shadow of Cosa Nostra in Sicily and the Camorra in Naples.
While those two syndicates, notably the Sicilians, were feeding off the transatlantic heroin trade through operations like the infamous 'French connection', 'Ndrangheta was only just emerging from its traditional stock-in-trade of kidnappings in the Calabrian highlands.
It has since become a highly sophisticated global network with a chokehold on the European cocaine trade and control over swathes of its home turf where police fear to tread, Italian officials say.
As well as being the richest, 'Ndrangheta is also regarded as the most impenetrable of Italy's mafias, with its close-knit family-based organisation outdoing the Sicilian mafia in its ability to defeat police efforts to turn members into State witnesses.
The European law enforcement agency Europol has identified the 'Ndrangheta mafia as one of the "most threatening" organized crime groups on the global level, due to its "enormous financial might" and "immense corruptive power," with a presence in Germany, Spain, the Netherlands, France, Belgium, Switzerland, Canada, USA, Colombia and Australia, where 'Ndrangheta turf wars have gained headlines.
In Europe, 'Ndrangheta really only came into the public eye in 2007, when six clan members were gunned down on the midsummer Ferragosto holiday in the German city of Duisburg in a feud that began as a wedding spat in a small Calabrian coastal town, San Luca, in 1991.
A string of 'Ndrangheta-linked businesses have been seized in the last few years all over northern Italy, and especially in the affluent Lombard belt around Milan, and a Lombardy regional councillor was placed under investigation for buying votes from transplanted clans.
On the Italian Riviera, the town councils of Bordighera and Ventimiglia were dissolved for 'Ndrangheta infiltration in 2011 and 2012, the first non-Calabrian municipalities to be wound up because of such penetration.
In Rome, the Calabrian Mob has laundered money in a string of plum properties, as attested to by recent seizures police say are only the tip of the iceberg.
The biggest ever 'Ndrangheta trial got under way at Lamezia Terme in January 2021.
The trial delves into the activities of the 'Ndrangheta clans in Vibo Valentia and their links to the political, institutional, economic and rogue Masonic worlds controlling all aspects of local life in Calabria.
It is the biggest mafia trial in Italy since the so-called 'maxi-trial' of Cosa Nostra in Sicily from 1986 to 1992.
The trial, which is expected to last around three years, has over 300 defendants who are facing over 400 charges.
The defendants include local politicians, businessmen, police and other institutional figures accused of helping 'Ndrangheta hold sway over Calabrian life.
That trial handed down its first sentences on Calabrian mobsters and their clients in November.
In January 2015 police arrested more than 160 people in the biggest-ever operation against a northern business arm of 'Ndrangheta.
The op showed how far the one-time southern kidnapping gangs had infiltrated the economy of Italy's most affluent regions, including the thriving economy of Reggio Emilia around Bologna.
Other probes have shown the increasing 'Ndrangheta infiltration in the region around Milan, Lombardy, the region around Genoa, Liguria, and the region around Turin, Piedmont.
In February 2014 a major Italian-FBI bust showed that 'Ndrangheta was muscling in on the drug operations of one of Cosa Nostra's historic five families in New York, the Gambinos.
Before that, in July 2010, a massive police operation netted the head of the 'Ndrangheta and 300 others.
Domenico Oppedisano, 80, anointed the equivalent of the 'boss of bosses' in Cosa Nostra at a Calabrian shrine to the Madonna a year previously, was caught along with their reputed head in Lombardy, Pino Neri.
'Ndrangheta is so secretive that the replacement for Oppedisano is still not known. (ANSA).