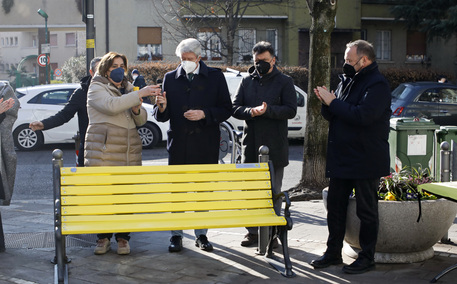 (ANSA) - ROME, JAN 25 - Giulio Regeni's hometown of Fiumicello in Friuli on Tuesday remembered the 28-year-old Cambridge doctoral researcher on the sixth anniversary of his last sighting on the Cairo metro before being tortured to death as a suspected spy in the Egyptian capital and his barely recognizable body turning up on the motorway to Alexandria a week later.
"It is right that this school park be named after Giulio but we are asking for more, for yellow benches to be set up (across Italy)", said his mother Paola Deffendi, who recognised her son only by the tip of his nose after his torture allegedly by Egyptian security officers.
Yellow is the colour that his parents have chosen to remember their son, and it is the background for all appeals to bring the culprits to justice.
Students and others on Tuesday read out their poems and writings about the case, which started with the discovery of the student's body on February 3, 2016, after his disappearance on January 25 of that year.
Premier Mario Draghi and Justice Minister Marta Cartabia had a video-conference meeting on Monday with Deffendi and Regeni's father Claudio.
After the meeting the premier's office said "possible initiatives" were discussed on how to follow up on a petition to the government to intervene in the case from a Rome preliminary hearings judge (GUP).
Earlier this month the GUP called on the government intervene to enable the case to move forward against four Egyptian National Security Agency (NSA) officers over the torture and murder of Regeni, who was researching the politically sensitive issue of Cairo street hawker unions.
In October the Court of Assizes in Rome had ruled the trial in absentia of the four Egyptian security officers could not proceed until there was proof the defendants had formally received notice of being on trial, sending the case back to the GUP.
The GUP then transmitted the case documents to the government to verify if anything had come from warrants sent to the Egyptian authorities in April 2019 and to see if there was any room for dialogue with Cairo on this matter.
"We want concrete action on this," Regeni's parents said Tuesday.
Regeni was abducted, tortured and killed by Egypt's security apparatus, a parliamentary commission of inquiry into the early 2016 incident said in its final report on December 1.
The responsibility for Regeni's death lies with the four Egyptian National Security Agency (NSA) officers, whose proxy trial in Rome stalled due to the inability to inform them they are being tried, said the commission.
The commission said Rome prosecutors had "minutely reconstructed" how the officers abducted, tortured and killed Regeni.
It said that Egypt should now be called to "face up to its responsibility" in the case.
It said "if it is good that (prosecutors) are insisting despite the ever clearer Egyptian boycott (of the investigation and trial), at a political level it is time to remind Egypt of its responsibilities, as a State, which are very clear.
"The time has come for a decisive step to be taken with the Egyptian government in order to remove the obstacle hindering the probe".
The commission added that the discovery of Regeni's body had "not been accidental" and that the student's Cambridge supervisor, Professor Maha Abdelrahman, was not at fault in the case.
Regeni was found dead in a ditch on the Cairo-Alexandria highway on February 3, 2016, a week after disappearing.
He had been fingered as a spy by the head of Cairo street sellers' unions.
The Regenis have appealed to the EU for help in finding the truth about their son's slaying and have condemned continued Italian arms sales to Egypt including two frigates.
The case may collapse entirely if the four officers are not located, judicial sources said after the October 14 ruling.
The judge said it could not be "presumed" that the four knew about the proceedings because of the heavy media coverage of the case, as a previous judge had ruled.
It said the four had to be "effectively" informed of the case against them.
The October 14 ruling was a blow to the closely watched first international judicial examination of Egypt's controversial national security policy which has brought widespread condemnation from human rights groups.
Alessandra Ballerini, the Regeni family lawyer, told the court on October 14 that fifteen of Regeni's bones were fractured and five of his teeth smashed, while numbers had been carved into his skin.
National Security General Tariq Sabir and his subordinates, Colonels Athar Kamel Mohamed Ibrahim and Uhsam Helmi, and Major Magdi Ibrahim Abdelal Sharif, were on trial at the third Court of Assizes in Rome.
In an important signal, the Italian premier's office decided to stand as a civil plaintiff in the case, along with Regeni's parents, who were in court with Regeni's sister Irene.
Rome prosecutors say that Regeni was tortured for days, resulting in "acute physical suffering" by being subjected to kicks, punches, beaten with sticks and bats and cut with sharp objects, and also being burned with red-hot objects and slammed into walls.
His neck was then snapped in a fatal blow.
Egypt's prosecutor general, Hamada al Sawi, has said "there is insufficient evidence to prove the charges".
At various times Egypt has advanced differing explanations for Regeni's death including a car accident, a gay lovers' tiff and abduction and murder by an alleged kidnapping gang that was wiped out after Regeni's documents were planted in their lair.
Lack of cooperation on the case by Egypt led to Rome's temporarily withdrawing its ambassador from Cairo for a spell.
(ANSA).