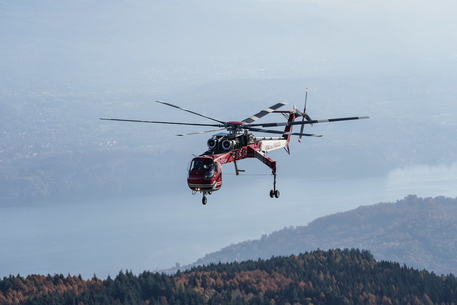 (ANSA) - ROME, NOV 8 - A fire brigade Erickson S64 helicopter on Monday took away the wreckage of the cabin involved in the Mottarone mountain cable-car disaster in Piedmont in which 14 people died in May.
The cabin, weighting around one and a half tonnes, was taken to a nearby sports ground.
From there it will be transferred by lorry to a warehouse.
The cable slipped out of control after a haulage cable snapped.
It crashed to the ground after hitting a pylon.
Prosecutors in the city of Verbania said the cable car's emergency braking system, which should have prevented the disaster, was deactivated deliberately "for economic reasons in total disregard for the most basic safety rules".
Three people are under investigation.
The only survivor of the disaster, an orphaned Israeli boy, is at the centre of a custody battle between the paternal and maternal sides of his family.
Eitan Biran was taken out of Italy and flown to Israel by his maternal grandfather in September during a visit.
But a Tel Aviv court recently ruled that the child must return to Italy and the care of his paternal aunt.
Eitan, who moved to Italy with his parents in 2018, had been put into the care of his Italian-based paternal aunt, Aya Biran, after the disaster by the Italian authorities.
Eitan's parents, great grandparents and two-year-old brother were among the victims of the disaster. (ANSA).