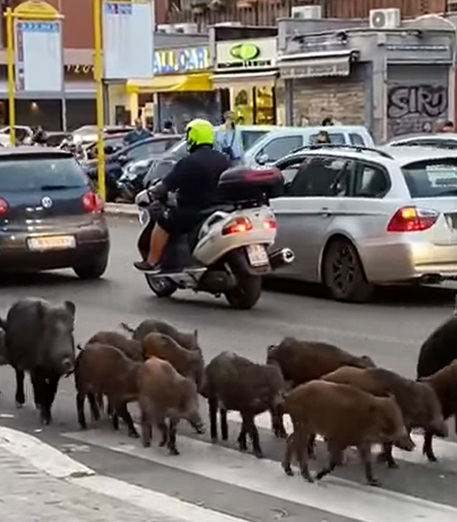 (ANSA) - ROME, SEP 22 - A family of 12 wild boar strolled through Rome traffic on Tuesday spurring a video that went viral on the Web.
Rangers said the animals were completely urbanised and were in no way afraid of pedestrians or the heavy traffic in the Italian capital.
Such sightings have become quite common in the northern part of Rome.
The boar were found roaming on the Via Trionfale, one of Rome's biggest streets.
On September 1 Rome Mayor Virginia Raggi filed a criminal suit against the Lazio regional government over "the massive and uncontrolled" presence of wild boar in the Italian capital's urban areas.
The boar invasion, said the 5-Star Movement (M5S) politician, was due to a failure by the regional government, which is led by Democratic Party (PD) former leader Nicola Zingaretti, to implement effective management plans for the animals.
Raggi cited a 1992 law which says regions must "provide for the control of species of wild fauna even in areas where hunting is forbidden".
It was up to the regional government to capture the boar and let them back into the wild, she said.
Another family of wild boar were caught on CCTV cameras roaming a central Rome street in search of food recently.
The animals, which appeared to be unfazed by passing cars and wary pedestrians, were filmed in the central Via Fani, site of late Christian Democrat statesman Aldo Moro's kidnapping in 1978.
The mother and her piglets appeared to be very hungry as they rummaged through refuse, passersby said.
Italian farmers took to the street in front of parliament and across the country in early July to protest what they say is an "invasion" by wild boars into farmland and cities all over Italy.
Farm group Coldiretti said that during the COVID year the number of wild boar straying onto farms and roving the outskirts of Italian cities had risen by 15% to a record total of 2.3 million animals.
Coldiretti published what it called a "tragic" toll of one incident caused by the boar every 48 hours in a year of COVID.
There have been 16 victims of wild boar incidents in the past year, and 215 people injured, Coldiretti said.
The number of car crashes cause by animals on Italian provincial roads has risen by 81% over the past 10 years, the farmers association said.
Farmers, animal breeders and shepherds from all over Italy gathered in all of Italy's 20 regional capitals starting in Rome where they rallied outside the parliament building, Montecitorio.
They said they want to "stop a calamity that destroys crops, attacks animals, besieges stables and causes road accidents, with concrete dangers for farmers and citizens".
A group of young farmers dressed up in boar costumes stopped MPs and explained to them the "emergency situation" they have to face each day.
Other farmers brought fruit, salad ingredients and cereal crops that had been completely destroyed by boar.
The protesters also held up life-size cut-outs of boar to show politicians how scary an encounter with the animals can be.
They also waved banners reading "After COVID, the plague of boar", "We sow, the boar reap", "Let's defend our land" and "Town and country united against wild boar".
Many city mayors came to Montecitorio, as well as ordinary citizens worried about what they called "a full-blown emergency". (ANSA).